In 2015, the Royal Society announced that as part of the Royal Society-DFID Africa Capacity Building Initiative funded by the Department of International Development (DoID), ten grants would be awarded to British universities working in collaboration with sub-Saharan African universities on research projects focusing on water and sanitation, renewable energy and soil. A project led by Dr Christos Markides at Imperial University’s Department of Chemical Engineering was successfully chosen in the second round, for its research and development into concentrated solar power (CSP).

Solar energy is most commonly captured using photovoltaic panels, already a common domestic sight. CSP, however, takes this to another level using entire solar fields to capture large quantities of solar energy and concentrate it in order to power a thermodynamic power plant.

The grant covers research for five years, at the end of which the teams hope to present a viable model for direct steam generation CSP while also helping to build the capacities of the Universities of Lagos and Mauritius. 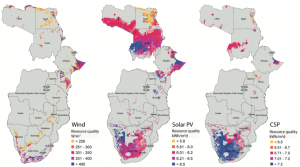 As Markides explains: “Typically, these solar fields have very long lengths of parabolic reflecting mirrors which look like parabolas. These concentrate sunlight into some kind of fluid which is being circulated at the focal lines of these parabolic mirrors.”

Other CSP systems such as Power Towers use computer controlled mirrors called heliostats for maximum efficiency, as opposed to the parabolic troughs.

So far, commercial CSP has almost exclusively relied on a suitable heating transfer fluid to create steam from the concentrated solar energy. “The power plant is effectively operating on steam, like the basic concept of a conventional power plant,” says Markides. “It’s exactly the same thing here it’s just that you have to take that thermal energy from the solar collectors, pass it through a heat transfer fluid, and deliver it to the steam which is undertaking the thermodynamic power cycle.”

This liquid must be able to withstand immense temperatures, narrowing the available options. Most CSP relies on either oils that can reach temperatures of up to 400°C, or molten salt if higher temperatures are required. Already the US alone has 1,800MW of transfer fluid-based CSP plants installed with plans to build more.

In 2018, the largest CSP plant in the world will open in Morocco and it will power over a million homes. The Noor Complex is costing $2.2bn but will save 760,000t of carbon a year. It relies on salt as a heat transfer fluid, to reach 400°C, and it holds heat so efficiently that the power plant can remain active for three hours after the sun has set.

This project, however, is setting out to change how CSP is done, by removing the transfer fluid and instead using the solar energy to heat the steam itself. “What we’re proposing is that, rather than have this middle man, we want to take the steam straight from the power station and heat it directly inside the solar field,” explains Markides. “This is called direct steam generation, and this is at the heart of our proposal, to examine what happens when you try to send steam straight to the solar field.”

The key benefit of direct steam generation CSP is increased efficiency. “From a thermodynamic perspective this is clearly advantageous because this kind of intermediary fluid that you use currently means that you have a temperature drop between solar field and your thermodynamic power plant,” explains Markides. If the steam was heated directly by the solar field, this drop should no longer occur, allowing for higher temperatures to be maintained and, therefore, more efficient generation.

But moving away from using conventional transfer fluids could also have its drawbacks. Transfer fluid allows a degree of flexibility, so for instance, at the Noor Complex where salt is used to hold heat for hours as this enables a greater level of control. “The intermediary fuel also allows you certain flexibility in the sense that you can vary the flow rate,” says Markides. “This means you can do different things that almost buffer the operation of your power plant from what the sun is doing.” One such benefit is that the transfer fuel can mitigate the impact of poor weather, to some extent.

This collaboration is broader than simply research; however, as the grants title suggests, the secondary focus is on building CSP capacity in Africa. Within the UK there are many research systems in place that Markides believes are often taken for granted, and the absence of such systems is holding back many teams in African universities. The Royal Society-DFID Africa Capacity Building Initiative aims to help strengthen research capacity through funding and training.

“One clear example is that our partner in Lagos doesn’t have a continuous electricity supply, and it’s very difficult for people to do computational work when at random intervals the whole power network shuts down and there’ a blackout,” says Markides. “This is something we take for granted, we run simulations and you just come back after a few days and you check your results. In Lagos that’s just not possible, so we need to find solutions to these things.”

This is one of the issues the initiative hopes to tackle, and a plan is already in place. “One easy solution in the example I just mentioned is that the project has a budgeted generator for them which, basically, once they get that installed, will kick in whenever there’s a power failure to make sure that you can run simulations over prolonged times.”

Training the next generation

The ability to collaborate and train PhD students in key areas of research, such as renewable energy, is also at the core of the initiative. Each of the ten projects which received the grant has three PhD students whose training is funded by the DoID. As Markides says, “This is a chance for us, two established laboratories, to collaborate but also to help newer, younger academics to establish themselves and build institutions within Africa.”

Markides believes this research and collaboration will have wider benefits still, given Africa’s huge solar potential. “There is a lot of solar energy in this continent, there’s a large population and there are problems in Africa. Delivering power to people in growing economies is important to help lift them out of poverty and help development.”

Currently, more than 600 million people in sub-Saharan Africa lack electricity, and whilst 60% of those in urban areas have access to electricity in their homes, only 14% do so in rural areas. Solar power not only provides an environmentally friendly source of energy but also brings hope of infrastructural expansion.

“I hope that in the end we have two things, us coming along and proving that this is a viable technology,” Markides says, adding that, “After four years that we have built these labs in Africa, they now have the capability to do this level of research; they have the knowledge, the people, the technicians and the PhD students who will come out and hopefully make that little bit of a contribution in driving these economies forward.”