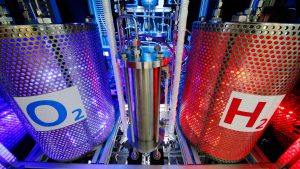 Following its new strategic direction into the sustainable energy space, Buscar is entering this new market by acquiring a manufacturing company with innovative solutions in energy generation and green hydrogen production using concentrated solar power. These solutions are revolutionary technologies that will create the way for new sources of electrical power and green hydrogen.

Vadim Gurman, CEO of APTG, Inc., indicated: “we have developed solutions to build an ecosystem consisting of an advanced solar concentrator, made from mirrors as a Fresnel lens, a high-temperature receiver, thermal storage for night usage, and a power generator. Instead of the high-temperature receiver, a reactor of green hydrogen can also be installed. It is a new and advanced technology for hydrogen production.

Buscar President Jose Kreidler stated that “green hydrogen provides a versatile, zero-emission fuel for electricity generation and transportation. The mass adoption of green hydrogen will significantly aid the global energy transition from fossil fuel to carbon-neutral energy; as well as concentrated solar power technology and its solution for changing the world for a sustainable future.”

Reuters: – Green hydrogen is often touted as the future of energy, providing a flexible and zero-emission fuel for transportation and electricity generation.

International Energy Agency: – The global energy crisis sparked by Russia’s invasion of Ukraine has accelerated the momentum behind hydrogen and the opportunities that it offers to simultaneously contribute to decarbonization targets and enhance energy security. Dr. Fatih Birol says: “Hydrogen is today enjoying unprecedented momentum. The world should not miss this unique chance to make hydrogen an important part of our clean and secure energy future”. It needs to be adopted in sectors where it is almost completely absent, such as transport, buildings, and power generation.

ABOUT BUSCAR COMPANY: The Company is a mining operation that holds the rights to ten gold mining claims at Treasure Canyon located in Plumas County, California. More recently, the company has also acquired thirty additional claims in the Bucks Lake area of Northern California. Combined, the Company has a total of 1,600 acres of unpatented claims in Plumas National Forest, California, and Nevada. Due to the apparent problem of energy shortages and the increasing demand for sustainable green energy production, Buscar made the strategic decision to expand in a green energy technology direction, which will enable the company to produce clean energy in a new and more effective way.