California’s grid is handling more than 15,000 megawatts of renewable capacity without incident

California’s grid is handling more than 15,000 megawatts of renewable capacity without incident

The instantaneous use of solar by the California Independent System Operator (the ISO) reached a record peak of 4,143 megawatts at 2:28 p.m. on March 16. It was enough electricity to power over 3 million homes, according to the ISO.

The new record supplanted preceding records set on March 8, 14, and 15. It is primarily the result of new capacity coming on-line, according to California ISO Senior Public Information Officer Steven Greenlee. That includes BrightSource Energy’s 392-megawatt Ivanpah CSP project, as well as the 1,900-plus megawatts of new utility-scale PV GTM Research’s 2013 U.S. Solar Market Insight report noted was installed by the state in 2013.

New records are coming so quickly California’s grid operator has decided to change its policy on announcements, Greenlee said. The ISO will now only announce 500-megawatt advances of the record instead of announcing 50-megawatt increments.

The record-breaking 4,143-megawatt instantaneous solar peak March 16 was almost twice the 2,071 megawatts that set the record just nine months ago, on June 7, 2013. 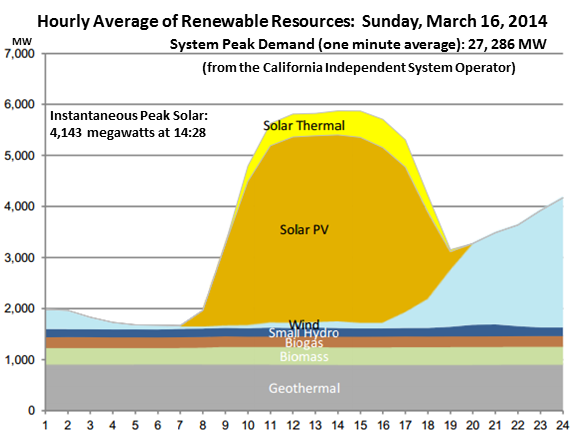 This production from ISO renewable resources does not readily correlate to the mandated requirement on California’s utilities to obtain 33 percent of their retail sales from renewables by 2020, Greenlee said. But it does show how the ISO could call on various renewable resources throughout the day to get 88,525 megawatt-hours of the state’s 535,556 megawatt-hours of total 24-hour system demand from renewables.

That is over 16.5 percent of California’s total March 16 demand, and it demonstrates that the state’s electricity transmission system is ready to handle the rapidly increasing levels of renewable energy, Greenlee acknowledged.

California’s wind resource typically rises in the spring, and longer days will likely add to the available solar, Greenlee said, so even higher levels of total megawatt-hours from renewables could be coming soon. 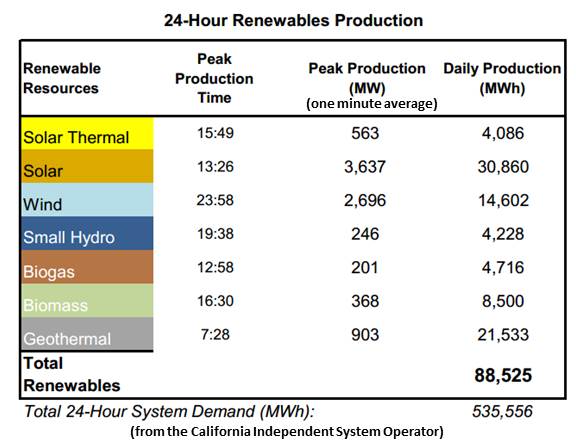 The ISO has been working aggressively to prepare the state’s grid to manage the amount of renewables-generated electricity that will come from the 2020 mandate and is “on track,” Greenlee said. That includes “comprehensive planning efforts to make sure the transmission network is ready to carry the energy from new renewable resources, as well as reforming our interconnection studies and transmission planning processes to give renewable developers more certainty,” he added.

The ISO has also added advanced solar and wind forecasting and an array of demand response resources, and has expanded its market network into balancing authorities in the Pacific Northwest and other parts of the desert Southwest.

One of the ISO’s major concerns is the duck curve that shows how rapidly the amount of renewables available to meet demand can change. It also shows that there could be as much as a 13,000-megawatt ramp in demand at the evening peak, just when the sun sets, Greenlee said. “With higher levels of variable generation, there is an increasing need for flexible technologies like energy storage and rapid ramp natural gas plants.”

And, as solar power plant builder BrightSource Energy’s Joe Desmond recently pointed out, “Governor Brown said the 33 percent mandate was a floor, not a ceiling.” 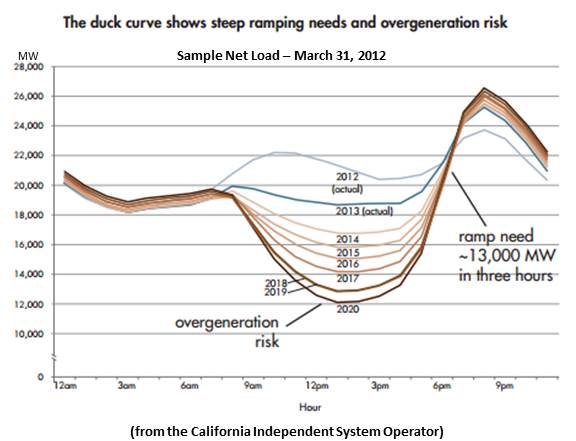