The major global cement producer CEMEX has begun work with the solar fuel start-up Synhelion to demonstrate the world’s first zero emissions cement production with high temperature solar. Synhelion is a solar research spin-off from ETH that uses an advanced concentrated solar thermal (CST) technology to generate temperatures at up to 1,500C for thermochemistry and industrial heat. 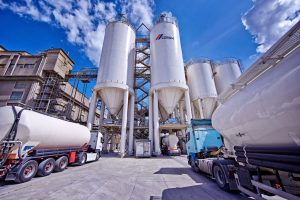 The jointly planned 1MW demo will prove an innovative solar thermal energy solution to a key climate challenge; replacing fossil energy and eliminating carbon dioxide emissions from cement manufacturing – which is responsible for about 8 percent of the world’s annual emissions of CO2.
Synhelion will substitute very high temperature solar at 1500°C to replace the burning of fossil fuels to supply the heat.

A meeting of minds

The scientists driving the initiative between the two firms were introduced by a mutual colleague, and they described the project in a call with SolarPACES this week.

“Synhelion has one of the most interesting technologies that will significantly reduce CO2 emissions in cement manufacturing,” said Davide Zampini, CEMEX Head of Global R&D, whose background is in cement chemistry and material science. ”We’ve been looking into solar heat for some time, so Synhelion caught our interest.”

Zampini is not just looking at solar for heat, but also in solving the most intractable problem with cement emissions, which is in the calcination reaction of limestone. Cement-making emits carbon dioxide in two ways, a third from the use of fossil fuels for heating its processes, but about two thirds comes from the chemistry of the calcination reaction itself that naturally emits carbon dioxide.

He showed Synhelion CEO, Gianluca Ambrosetti, where the problem of natural emissions occurs and Ambrosetti immediately sketched out a diagram of how Synhelion would be able to capture these in addition to supplying heat, because of the concentration of the carbon dioxide emissions from the calcining reaction. And Synhelion has a commercial use for them, in making solar aircraft fuel.

Synhelion makes solar jet fuel and other hydrocarbons without fossil fuels by utilizing very high temperature solar thermochemistry to rearrange molecules of H2O and CO2. So it actually also needs to obtain a steady supply of CO2.

‘Yes, this is the central point,” agreed Ambrosetti, whose scientific background is in physics. “As our own process for making solar fuels is designed to feed in CO2, it is easy for us to extract the CO2 emissions from the calcination reaction in practically pure form. This means that we don’t need to invest in a massive separate carbon sequestration unit.”

This is much easier than capturing CO2 from the flue gas coming out of a coal plant, because it is already in a closed loop with no air. There are no NOx emissions. Because coal is burned in air – which is mostly nitrogen – CO2 separation in a coal plant is complex and expensive.

Zampini immediately understood the advantage of this dual aspect of the technology. Much research has gone into using solar thermal heat for cement making, but this is a first to also include carbon capture. 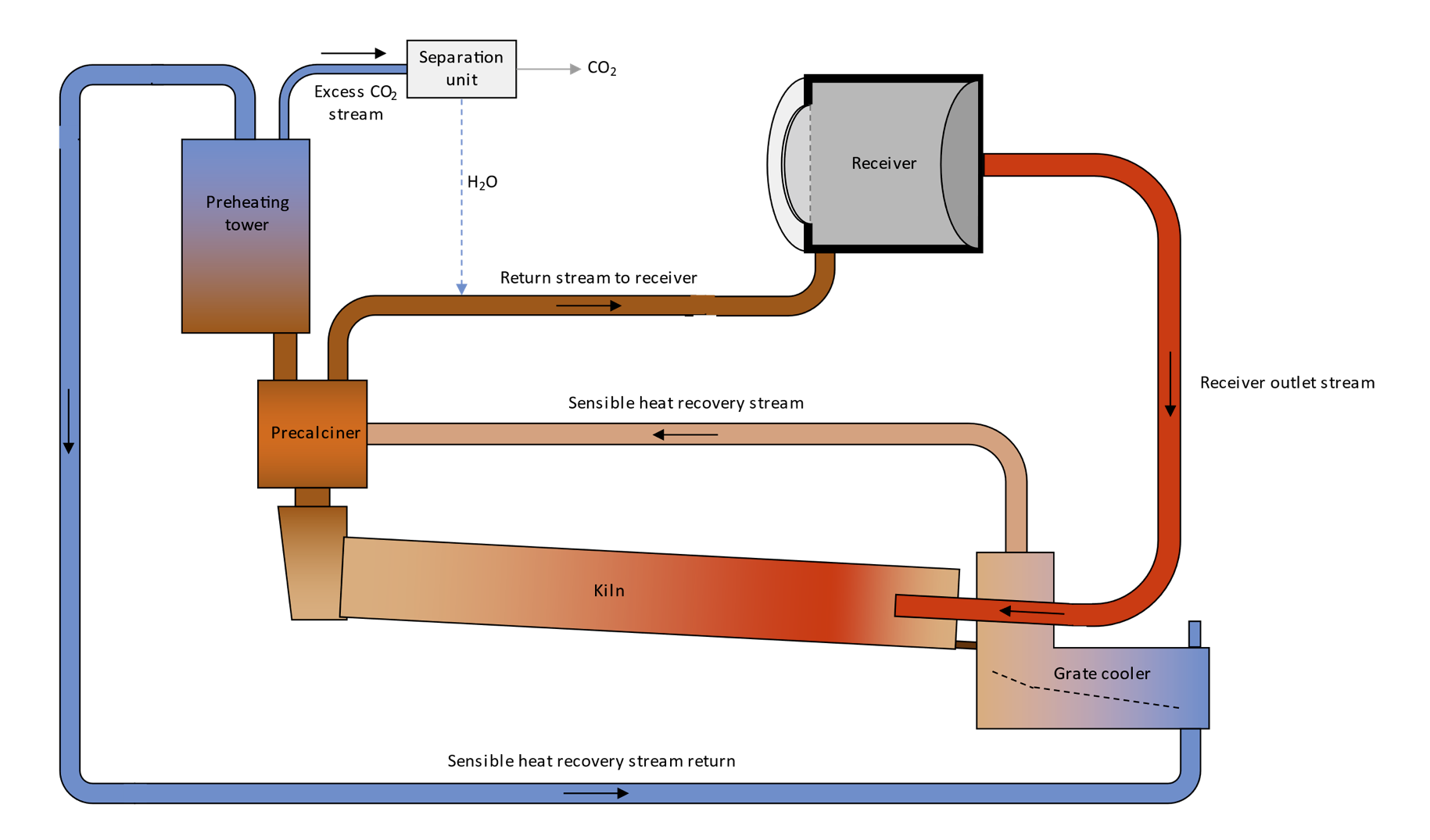 Synhelion will use a slightly different setup from the components it uses for manufacturing solar fuel. There would be the same solar field, tower receiver and storage at the cement site, but no solar reactor, which is where its solar fuel thermochemistry is performed. For this technology, it would simply siphon off the carbon dioxide and mix it with water vapor, using some as a heat transfer fluid (HTF), and putting some aside for use in manufacturing solar fuels, that would be made and sold separately.

“Since the HTF is composed of carbon dioxide and water vapor, CO2 extraction is quite straightforward. Water can be condensed out leaving concentrated CO2. This pure CO2 stream originating from the plant is what would then be supplied to a Synhelion solar fuel synthesis plant elsewhere,” he said.

“CEMEX actually provides the raw material we need to make our solar fuels,” said Ambrosetti. Synhelion is also working with a major oil company and Switzerland’s international airport to produce solar aircraft fuel. “For us, cement plants offer a very good supply of highly concentrated CO2, which is worth capturing. Our system produces heat for the cement plant and receives CO2 which we can then use to produce synthetic fuels.”

The partners now plan a demo for the end of 2022. “Our initial vision is a 1 MW receiver input and a solar field of 2,000 sq ft of heliostats, to prove its viability,” said Ambrosetti. “But of course 1 MW is still a very small, pre-commercial plant. Cement plants are huge. A full size solar unit would have a receiver input power in the 150 MW range.”

“The gaseous heat transfer fluid – carbon dioxide and water vapor – will be heated in the solar receiver to above 1,500°C. The receiver uses the Synhelion absorbing gas principle which uses greenhouse gases to work in a closed loop. The hot HTF is fed to the cement pyro-processing stage; a rotary kiln and pre-calciner where it will heat the material in a counterflow arrangement,” Ambrosetti explained.

“After delivering heat to the process, some of the HTF, which has now cooled down to around 800-1,000°C, gets fed back to the receiver to be heated again. All the carbon dioxide emissions from calcination remain within the solar-driven cement plant and mix with the HTF. Therefore, excess carbon dioxide originating from calcination is continuously extracted from the HTF.”

Cement manufacturing runs continuously, and start-and-stop operation is not practical. Thermal energy storage like in a power plant running on CSP will be used to deliver the solar heat continuously to the process and backup heating from either electricity or hydrogen will be included for longer periods where the temperature of the HTF could drop, to ensure stable heat delivery 24/7.

Many cement making regions also have a good solar resource needed for this concentrated solar thermal technology. CEMEX itself has cement plants in more than 20 countries; Mexico, the United States, Central and South America and the Caribbean, Europe, Middle East, Africa and Asia. Many of these nations also have climate restrictions.

“We’re doing this for us, but also for the industry,” Zampini noted. “Not only in Europe and California, but in many other countries in the world carbon emissions are becoming more and more relevant and legislation is focusing on how to minimize emissions. So it’s something that we need to address. We don’t see this technology limited to CEMEX, but we believe that the whole industry can take advantage of what we’re developing here.”

CEMEX, headquartered in Mexico, is already a leader in the cement industry in cement emissions reduction. It has increased the adoption of alternative fuels to 28%, improved thermal efficiency, developed and is using low temperature clinkers and special admixtures to enhance clinker strength, and clinker-free binders. Its R&D team has participated in EU-funded projects in waste heat recovery, membrane technologies, oxy-fuel combustion, and taken part in the LEILAC indirect heat calcination and carbon capture project.

While all of these projects reduce emissions, its new technology partnership with Synhelion has the potential to eliminate carbon emissions from cement making entirely – while also supplying the raw material needed for Synhelion to mass-produce solar fuels like jet fuel.