The concentrated solar power plant, built by a consortium formed by Abengoa and Acciona for EIG Global Energy Partners, has a capacity of 110 MW and is the first of its kind built in Latin America. 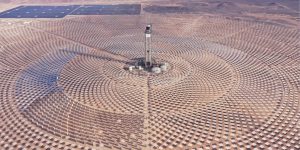 Yesterday, June 8, the Cerro Dominador solar thermal plant was officially inaugurated. It has been built by a consortium formed by Abengoa and Acciona and in which Abengoa acts as a constructor and as a technological partner, for the company EIG Global Energy Partners, in the Chilean town of María Elena, in the Atacama Desert (Antofagasta region), one of the areas with the highest solar radiation in the world.

The opening ceremony, which was held presential and virtual due to the restrictions derived from the pandemic, was attended by the President of Chile, Sebastián Piñera, and the Biminister of Energy and Mining, Juan Carlos Jobet, as well as representatives of the client and the construction consortium.

The construction consortium was awarded this contract in 2018. The project consisted of the construction of a solar thermal tower-plant, which joined the 100 MW photovoltaic plant built by Abengoa and already in operation, forming the first renewable energy complex that combines both technologies across the continent.

The Cerro Dominador solar thermal plant has a thermal storage capacity in molten salts of 17.5 hours, thanks to a pioneering thermal storage system designed and developed by Abengoa, and is capable of generating clean energy in a dispatchable way for 24 hours. The solar field, of more than 700 hectares, has 10,600 heliostats that direct solar radiation to a receiver located 252 meters high. It is estimated that the plant will save the emission of more than 400,000 tons of CO2 per year. In total, the complex will avoid 630,000 tons of carbon dioxide emissions per year.

The construction of the Cerro Dominador solar thermal plant has contributed significantly to local development with the creation of more than 1,000 jobs in the area at the highest peak of the project, employing a large number of residents of the communes of the region.

As a constructor and technological partner of the project, Abengoa contributes all its know-how in the construction of solar thermal plants, with an experience of more than 30 years. The company has developed and built plants with an installed power of 2.2 GW, which represents 34% of the installed capacity worldwide. Among his latest projects, its participation in the construction of the world’s largest solar complex in Dubai, currently under execution, stands out.