The Cerro Dominador project has overcome COVID-19 restrictions and is now 90% complete but the longer term impact on industry raises offtaker risks.

Despite COVID-19 restrictions, construction of the 110 MW Cerro Dominador CSP tower plant in Chile is advancing to the final stages. 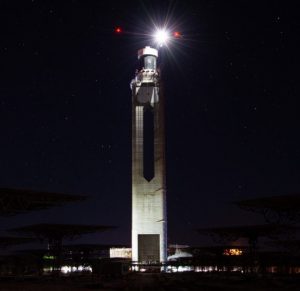 To limit the impact of COVID-19, the Cerro Dominador team has implemented strict hygiene and self-distancing protocols to ensure construction can continue.

There are currently over 900 people working across the large site and the project is over 90% complete, Fernando Gonzalez, CEO of Cerro Dominador, told New Energy Update.

Last month, EPC partners Abengoa and Acciona installed the receiver at Cerro Dominador. Weighing 2,300 tons, the receiver was installed at a height of 220 meters and will receive solar energy from 10,600 heliostats. Salt melting for the storage system was completed this month, another key step ahead of commercial start-up.

“Our next steps include the finalization of the piping in the tower and the receiver and the beginning of the commissioning of the plant using hot molten salt,” Gonzalez said.

After controlling the short-term risks, Cerro Dominador must now overcome the wider economic effects of COVID-19.

Chile’s industrial sectors are keen to reduce carbon emissions but the ensuing economic crisis from COVID-19 has increased the challenge of securing long-term offtake contracts.

In response to the pandemic, Chile closed its borders to international travellers on March 18. Thus far, domestic travel restrictions are concentrated around the capital Santiago and there is a nationwide curfew from 10pm to 5am local time.

As yet, there have been no significant delays to equipment and component supplies for Cerro Dominador due to COVID-19 restrictions, Gonzalez said.

Commercial start-up of the plant has been postponed by a few months to replace electrical equipment following a fire at the top of the receiver last November, Gonzalez noted.

The plant is now expected to start commercial operations in the second half of 2020, rather than in May as previously planned, he said. The PV plant will be used to fulfil offtake contracts until the CSP plant is completed.

The Cerro Dominador plant has been a long time coming. Back in 2014, the Chilean government awarded the project a 15-year power purchase agreement (PPA) at a price of $114/MWh. In 2016, the project suffered a two-year stoppage when original co-owner Abengoa underwent financial restructuring.

Last December, Cerro Dominador secured a five-year power purchase agreement (PPA) with Chilean fuel distributor Copec. The new PPA was scheduled to start in July 2020 and supply 50% of Copec’s energy needs, reducing its annual CO2 emissions by 19,850 tons. The contract will cover 72 Copec service stations, almost all of Copec’s electricity charging stations and eight of its 16 industrial plants in Chile.

The Cerro Dominador company is now actively working to sign further PPAs for the plant, a task made harder by COVID-19.

Prior to the outbreak, Chile’s total power demand was forecast to rise by around 25% by 2030 but COVID-19 has sliced global demand outlooks and raised counterparty risks. It also increases uncertainty for future CSP projects.

Across the world, stay-at-home orders have sliced power demand. In Chile, energy-intensive industries such as mining are already adapting to logistical constraints and the longer term economic impact of COVID-19.

The Chilean Chamber of Construction (CChC) forecasts investment in construction projects could fall 10.5% this year, following the COVID-19 outbreak and widespread social unrest in Chile in Q4 2019, sparked by a rising cost of living.

“This is a very competitive market where you can win or lose a contract by a few cents,” Gonzalez warned. “If the situation can be contained relatively quickly, power sector investments are likely to remain mostly unaffected, as they are capital intensive and aim for long-term returns,” Castro said.

How this regulation values each technology and provides long-term market stability will prove «critical,» Gonzalez said.