CSP plants could be built at a levelized cost of energy (LCOE) of $76/MWh near the city of Copiapo in northern Chile, according to a report by researchers at Santiago’s Universidad Tecnica Federico Santa Maria and the Fraunhofer Chile Research Foundation.

The researchers estimated CSP production, capital costs, operational costs and financial parameters at different locations to build a map of potential CSP projects. The team assumed a plant capacity of 130 MW and lifetime of 30 years. Capex costs represented 66% of total investment and the discount rate was 7%. 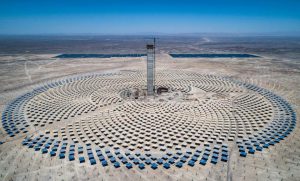 The highest potential for CSP development is found in a huge land area stretching from the far north region of the Arica and Parinacota region down to the Coquimbo region in central Chile, the study said. This area enjoys high irradiation levels of over 9.5 kWh/m2/day and moderate wind speeds for most of the year, it said.

The average LCOE of new CSP plants in this region is estimated at $89/MWh and costs fall to as low as $76/MWh near Copiapo, the researchers said.

EIG Atacama Management is currently building Chile’s first CSP tower plant in the Antofagasta region, around halfway up the high-potential area set out in the study.

Due online this year, the 110 MW Cerro Dominador plant features a record 17.5 hours of molten salt thermal energy storage capacity and will be combined with an operational 100 MW PV plant to supply power 24 hours a day. Back in 2014, the Chilean government awarded the project a 15-year power purchase agreement (PPA) at a price of $114/MWh but CSP prices have fallen dramatically since then. Last year, Morocco allocated an 800 MW CSP-PV project at $71/MWh, beating an earlier record of $73/MWh set in Dubai.

Owned by EIG energy funds, EIG Atacama Management also hopes to build a 450 MW plant at Likana, Antofagasta and expects to bid a record-low CSP price for the project in a tender later this year.

«We are working with different EPCs [Engineering procurement construction groups] to get good pricing. We are squeezing everything we can to make a good offer in the market,» Fernando Gonzalez, CEO of EIG Atacama Management, told the CSP Madrid 2019 conference.