China connected the 50 MW Delingha CSP plant to the grid on June 30, the first large-scale CSP plant to come online in the country, according to media reports.

The Delingha plant is located in Western China at 3,100 meters above sea level. The site has a direct normal irradiance (DNI) level of more than 2,150 kWh/m2/year. 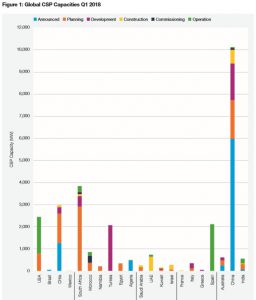 The dual-technology DEWA CSP project, awarded by the Dubai Electricity and Water Authority (DEWA) in September 2017, sets a new industry record for size and cost-efficiency. The project was awarded at a tariff price of $73/MWh and includes up to 15 hours of energy storage capacity.