On March 17, THVOW Technology issued its plan of 2017 non-public offering of shares. The plan showed that the total amount of collected fund will be not more than RMB1570 million, which will be invested in the construction and operation of Yumen Xinneng’s First Electric Power Co., Ltd. (short for Yumen Xinneng) 50MW Molten Salt Tower CSP project.

A CSP project needs a huge capital injection. One big obstacle project owners who are private enterprises are facing is financing issues. Yumen Xinneng solved the financing problem through its cooperation with THVOW Technology, which may have a reference value for other project owners. 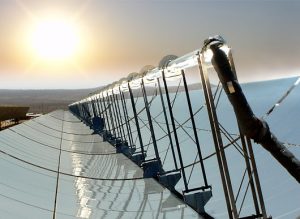 On March 16, China Sinogy released an announcement, which showed that China Sinogy had been confirmed as the general EPC contractor of Yumen Xinneng 50MW CSP demonstration project. Bid price is RMB1613 million. Project construction period is predicted as 19 months.

China Sinogy, whose headquarter is located in Shanghai, has a background of state-owned enterprise. Now, China Sinogy is a subsidiary of THVOW Technology, and has a Grade A design qualification of national electrical engineering and also a qualification of project general contracting.