China’s power system operators must invest in renewable energy to meet climate commitments. The cheapest options are wind power and PV, but they deliver power only when it’s sunny or windy.

Their more expensive alternative, Concentrated Solar Power, can store its solar energy relatively inexpensively, also for long durations, and can deliver power regardless of the daytime. It may be more expensive to produce, but the operating cost for a power system with a lot of energy is less than the competitors’.

The study, conducted by a research team from Bejing’s Tsinghua University, finds that substituting 5-20 percent of the planned PV and wind power in Gansu Province and Qinghai Province with CSP will bring the greatest benefit. It will reduce the operational cost of baseload coal generators, used to deliver power when there is not enough renewable energy.

These two provinces, Qinghai and Gansu, plan to supply 83% and 104% repectively of their maximum load with renewable energy. If Concentrated Solar Power substitutes 5 to 20 percent of this energy, the operational cost will be the lowest.

The study suggests an additional energy and flexibility benefit of 18 – 30 cents per kilowatt-hour in this scenario. Because of that, China decided to double the 2018 global CSP deployment of 5 GW by 2020. First, It plans to build 1 GW round of demonstration projects and then to build 5GW of it. For now, it is hard to achieve this, because not all of the parts can be produced by China at this point. Therefore, the learning process in the construction process is a little delayed. 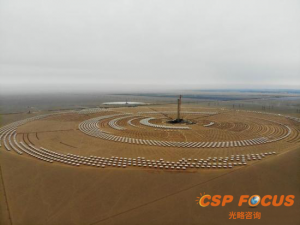 Another benefit from the technology is the cost of energy storage. All of China’s planned CSP includes Thermal Energy Storage (TES) systems. They are currently less costly (around 20-70 $/kWh) than battery energy storage systems (above $150/kWh).

The study has used a software developed by the research team to conduct year-round power system dispatch considering a wide range of types of generation and detailed AC/DC power grid and practical dispatching rules. It simulates the power system operation through a long time period using a sufficient amount of scenarios so that it is able to deliver an estimate on the costs of power system operation with wind, PV, and CSP.

The results showed that the benefit value was the greatest in Gansu(0.238-0.300 $/kWh). In Qinghai, because of hydroelectric power stations, the benefit value was under 20 cents (0.177-0.191 $/kWh). However, in both provinces, the investment in Concentrated Solar Power makes sense, regardless of the higher initial cost.