Despite the stagnation of CSP in Spain market, which owns the biggest capacity of operational CSP commercial projects, it seems that there’s no need for the Spanish and international CSP players to worry much about their CSP business development thanks to the thrilling expansion of emerging markets like China, Saudi Arabia, Morocco and South Africa. 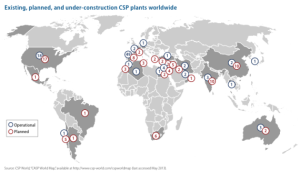 Among Middle East & Africa countries, experts agree that MENA countries each represent different opportunities. Saudi Arabia’s new Vision 2030 Plan sets a target of 9.5 GW renewables by 2023 alongside the roll out of large-scale industrialization projects; Morocco is generally seen as a promising renewable energy market, for its target to achieve 52% of installed renewable energy capacity by 2030, which will largely depend on solar. Currently the country has 350 MW CSP be under construction; South Africa is considered one of the fastest growing CSP markets in the world today with 200MW installed capacity and another 500 MW under construction and development supported by the REIPPPP. As the programs are moving forward, the local firms are expecting a great deal of international participation.

Moreover, High Temperature Applications (HTAs) are widely promoted as a quite promising area for CSP growth in addition to electricity generation in Middle East & Africa region. In such applications, solar fields would be coupled with secondary industries such as enhanced oil recovery (EOR), smelters, mining, cement manufacturing and chemical processing plants. For instance, low oil market returns and higher dependency on gas supplies have led countries such as Oman and Kuwait to pursue CSP EOR projects, such as the giant 1.0 GW MWth Miraah plant being developed by Glasspoint.

At the same time of enjoying vast market potentials of CSP, we should pay much attention on contributing to lowering LCOE so as to make more competitive among conventional and renewable energies. Innovation on technical route, system integration and every detail of the value chain is going on with industry players. To create a platform for industry to gather and share the technology innovations and project updates, CSP Focus will organize CSP Focus Innovation 2016 during June.29-30 in Madrid, Spain. See details on website.