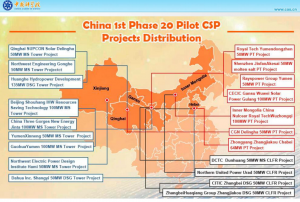 Offshore wind energy and solar thermal projects having already secured approval and commissioned before the end of 2021 will still be granted subsidies.
The government will also create a green certificate quota trading scheme in 2021, with the objective to boost the use of renewable energy and to reduce its reliance on coal. China has been experimenting with a voluntary green certificate exchange since 2017.

In January 2019, the government unveiled new solar and wind policies for the development of future subsidy-free projects. The renewable projects will generate power at the same price as non-subsidized coal-fired power plants and will not have to comply with any quota restrictions. However, wind and solar projects will receive governmental support on land and financing. Subsequently, in May 2019, China approved 250 renewable power projects totalling 20,760 MW in 16 provinces that will be developed without subsidy. In November 2019, China decided to reduce renewable power subsidies by 30%, from CNY8.1b ($1.15b) in 2019 to CNY5.7b ($807m) in 2020. China is phasing out public support to renewable power plants, as the fall in manufacturing costs is helping renewable projects to achieve grid parity with coal-fired power plants and to compete with them.