China says 1.35 GW of Concentrated Solar Power projects to be ready by 2018

China says 1.35 GW of Concentrated Solar Power projects to be ready by 2018

China’s National Energy Administration (NEA) on Tuesday unveiled a list of 20 solar thermal power, or CSP, demonstration projects with a combined capacity of 1,349 MW that it will aim to put on stream by the end of 2018.

The industry body called out to all parties involved in the projects, including local authorities and power companies, to work together to complete the projects on time. The first batch of solar thermal power demonstration projects in China will be spread across the provinces of Qinghai, Gansu and Hebei, as well as Inner Mongolia and Xinjiang Uygur autonomous regions, according to the statement. 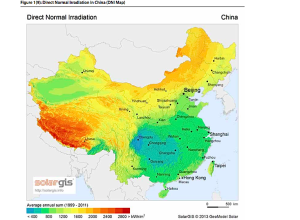 The concentrating solar power projects will have storage capacity, using molten salt and other technologies. All of the required documents need to be filed by September 30, 2016. NEA urged for construction works to kick off as soon as possible.