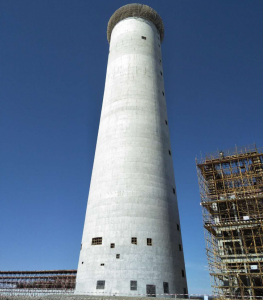 According to the news from the Hami Financial Media Center on March 12, with the implementation of the “Xinjiang Electric Power Delivery” strategy, the transformation of resource advantages in Hami City, Xinjiang Uygur Autonomous Region has been further accelerated, the power layout has been basically completed, and the 10 million kilowatt-level wind power base has been fully completed. At the same time, relying on the energy Internet with ultra-high voltage and ultra-high voltage as the backbone grid, it promotes clean and low-carbon transformation of energy, promotes the coordinated development of the economy and the power grid, and serves carbon peaking and carbon neutrality.

“Comprehensive acceptance by the National Energy Administration was completed in October 2021, and as of today, a total of 13 million kWh has been generated,” said Zhang Yong, deputy general manager of Energy China, China Power Hami Solar Thermal Power Co., Ltd.

In CLP Hami Solar Thermal Power Co., Ltd., 14,500 heliostats are distributed in a ring around the central heat collecting tower with a height of more than 200 meters, reflecting sunlight to the heat absorber at the top of the tower, and the low-temperature molten salt in the heat absorber is heated and changed. The high-temperature molten salt exchanges heat with water through a heat exchanger to generate high-temperature and high-pressure steam, which is then driven by the steam turbine to generate electricity.

The advantage of molten salt tower CSP technology is that it can generate electricity stably around the clock, which is a typical energy storage power generation project. The system provides 13 hours of continuous full-load power generation energy for the generator set, so that the power station can realize the complete decoupling operation of the concentrating heat collection system and the power generation system, and has excellent power system peak shifting adjustment ability, in order to achieve the carbon peak carbon neutrality goal Actively explored.