China’s first commercial concentrated solar power plant has begun a test run and is scheduled to send power to the grid by the end of this year, said the operator on Monday.

The Delingha solar thermal power station operated by the China General Nuclear Power Group (CGN) in northwestern province of Qinghai made its first test run on Aug. 31 with all equipment running normally, the company said. 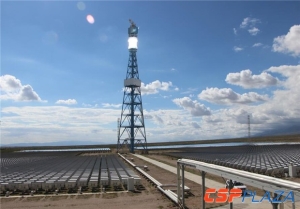 The project approved by the National Energy Administration in 2016 has an installed capacity of 50 megawatts of electricity, equivalent to the power produced by 60,000 tonnes of coal a year.

Sources with CGN said the plant can reflect sunlight to a central receiver to heat water, which produces steam to power a turbine for generating electricity. It is the first time that the technology has been put into commercial use in China.

Built on the sparsely populated plateau, the demonstration plant is expected to boost China’s efforts to meet the 2030 target of producing 20 percent of its overall energy from renewable sources.