The 110-kilowatt concentrated solar power plant, built at a cost of €500,000 by Swedish sustainable energy technology group Cleanergy and Al Futtaim Carillion, the Dubai-based contractor, is being unveiled on Wednesday.

A renewable energy project with the potential to transform the solar power sector is to be launched in Dubai.

The plant uses 10 mirrored dishes, each measuring 8.85m in diameter, to reflect solar heat into Stirling engines that generate electricity.

Cleanergy said its Stirling CSP system, which tracks the sun to produce more power for longer during daylight hours, is twice as efficient as traditional solar photovoltaics, or PV. It also utilises heat storage to produce electricity at night.

The company hopes to persuade Dubai and other regional governments to adapt the project to commercial scale as countries seek to diversify their power mix. The Swedish group says the CSP system, which was commissioned this year, has produced about 47,000 kWh during 12,650 operating hours.

State-owned utility Dubai Water & Electricity Authority, has been studying different forms of CSP to complement its existing PV systems as it works towards producing 15 per cent of its power from solar technology by 2030.

Cleanergy, which has raised $60m in funding from investors such as Sweden’s Wallenberg family and the Nobel Foundation, will need to overcome industry scepticism about the economics behind CSP systems. The group says a 100MW power plant using its CSP technology would cost about €200m. 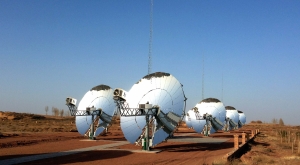 Jonas Wallmander, Cleanergy’s chief operating officer, said “competitive” tariff costs of 5 euro cents/kWh could be achieved depending on the amount of solar radiation received. That estimate is in line with the global benchmark set in January by Riyadh-based Acwa Power’s landmark 25-year deal to build a 100MW PV plant at Dubai’s solar park at a cost to Dewa of 5.85 US cents/kWh.

But industry executives question whether CSP can compete with PV systems that have recently benefited from a “drastic” drop in costs.

“CSP carries higher capital and operational costs,” said Vahid Fotuhi, founder of the Middle East Solar Industry Association. “This higher cost would make it challenging today to compete with the tariffs that Dewa has achieved with solar PV.”

Dewa’s Sheikh Mohammed bin Rashid Al Maktoum Solar Park, which currently produces 13MW of power, is building another 200MW of capacity by 2017 and plans to reach a maximum output of 3,000MW by 2030.