Researchers at the University of Houston and Massachusetts Institute of Technology have reported a substantial advance in generating electricity through a combination of concentrating solar power and thermoelectric materials.

By combining concentrating solar power – which converts light into heat that is then used to generate electricity – with segmented thermoelectric legs, made up of two different thermoelectric materials, each working at different temperature ranges, researchers said they have demonstrated a promising new alternative solar energy technology.

Their findings are published in Nature Energy.

Zhifeng Ren, MD Anderson Professor of physics at the University of Houston and an author of the paper, said the work illustrates a new low-cost, nontoxic way to generate power. While it’s not intended to replace large-scale power plants, it could prove especially useful for isolated areas that aren’t on a traditional electric grid, powering small clusters of homes or businesses, for example, he said. In addition to generating electricity, the technology also can produce hot water – valuable for both private and industrial purposes.

In addition to Ren, other authors on the paper include Gang Chen, Daniel Kraemer, Kenneth McEnaney, Lee A. Weinstein and James Loomis, all of MIT, and UH researchers Qing Jie, Feng Cao and Weishu Liu.

Ren, who also is a principal investigator at the Texas Center for Superconductivity at UH, said the work draws on the researchers’ earlier work, which demonstrated proof of the concept. For this project, supported in part by the Department of Energy, they actually built a device to measure how well optical concentration worked to improve the overall system efficiency.

“The performance improvement is achieved by the use of segmented thermoelectric legs, a high-temperature spectrally selective solar absorber enabling stable vacuum operation with absorber temperatures up to 600 (degrees) C, and combining optical and thermal concentration,” the researchers wrote. “Our work suggests that concentrating STEGs (solar thermoelectric generators) have the potential to become a promising alternative energy technology.” 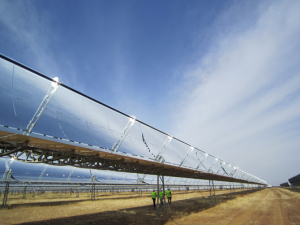 To gain the higher efficiency, the researchers used a solar absorber, boosted by optical concentrators to increase the heat and improve the energy density. The absorber was placed on legs constructed of thermoelectric materials. While their previous work used only bismuth telluride – a well-known thermoelectric material – this version used skutterudite for the top half of the legs and bismuth telluride for the lower half.

Thermoelectric materials produce electricity by exploiting the flow of heat current from a warmer area to a cooler area. By using two materials, the researchers said they were able to take advantage of a broader range of temperatures produced by the solar absorber and boost generating efficiency.

“The record-high efficiencies are achieved by segmenting two thermoelectric materials, skutterudite and bismuth telluride, coupled to a spectrally selective surface operated at close to 600 (degrees) C by combined optical and thermal concentration of the sunlight,” they wrote.