ACWA Power, Riyadh based global leading water and power developer, owner and operator across 10 countries, today announced a molten salt solar project that will contribute approximately 50 Mega Watt (MW) to the country’s current electricity generation capacity from early 2016. As part of the South African Government’s Renewable Energy Independent Power Producer Procurement (REIPPP) programme, the Bokpoort Concentrated Solar Power Independent Power Project ("Bokpoort CSP Project") is currently in its commissioning phase at Groblershoop, situated near Upington in the Northern Cape – a province that boasts one of the highest solar radiation footprints in the world.

Bokpoort’s CSP technology effectively allows for the ‘banking’ of excess solar energy during the day, which can then be released after sun down; enabling consistent electricity supply during peak demand periods between 5pm and 9pm in the early morning The thermal storage capacity of 1300MWh, which is equivalent to about 9.3 hours of operation, is the largest ever adopted by a solar power plant of this class in the world. This makes Concentrated Solar Power (CSP) the only renewable technology at a commercial scale that is able to meet the country’s daily peak demand, thereby helping to prevent load shedding. The solar energy generated by the 658 000 m2 of reflector area will be fed directly into Eskom’s Garona substation, located next to the site, under a 20 year Power Purchase Agreement (PPA). 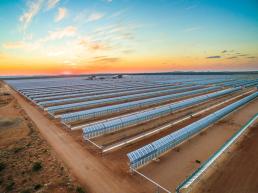 "We are proud to be a part of creating a sustainable future for South Africa through the reliable delivery of renewable electricity. This project allows for delivery of electricity at the lowest possible cost into Eskom’s national power supply network, and will also enhance local socio-economic development and long-term growth," ACWA Power Chairman, Mohammed Abunayyan, today told a delegation of local journalists and government officials during a visit to the site. South Africa’s Deputy Minister of Energy, Thembi Majola and other dignitaries were also in attendance.

The Bokpoort CSP Project has led to the creation of more than 1100 local jobs during the peak of its construction – 390 from the surrounding community – and over 50 permanent employment opportunities will be made available during the operation of the power facility. In addition, the initiative has facilitated local shareholding in the project company and allowed for the participation of high level broad-based black economic empowerment (BBBEE) companies for construction, operation and maintenance.

In demonstrating its long-term commitment to South Africa and the community in which it will be operating, ACWA Power, has put upfront R5 million towards a number of development programmes in partnership with the !Kheis Municipality. These include, amongst others:

· The installation and maintenance of 300 home photovoltaic (PV) solar systems in the Duinefeld township, which had no access to electricity before

ACWA Power is a developer, investor, co-owner and operator of a portfolio of power generation and desalinated water production plants currently with operations in 10 countries in the Middle East and North Africa, Southern Africa and South East Asia regions. ACWA Power’s portfolio, with an investment value in excess of USD 26 billion, can generate 16.9 GW of power and produce 2.5 million m3 /day of desalinated water to be delivered on a bulk basis to state utilities and industrial majors on long term off-take contracts under Public-Private-Partnership, Concession and Utility Services Outsourcing models.

ACWA Power pursues a mission to reliably deliver electricity and desalinated water at the lowest possible cost while seeking to maximize local content and local employment creation, thereby contributing to the social and economic development of the communities and countries it invests in and serves.

ACWA Power Solafrica Bokpoort CSP Power Plant (Pty) Ltd, a limited liability company established under South African Law with the majority shareholder consortium led by ACWA Power and including the Public Investment Corporation (PIC) of South Africa (representing the Government Employees Pension Fund), Lereko Solafrica Investment, Lereko Metier Solafrica Fund 1, Lereko Metier Sustainable Capital Fund, Kurisani Solafrica Investments (representing the National NGO Lovelife) and Solafrica Community Investment Company . It is a greenfield project being developed on a BOO (build, own and operate) basis located in the Northern Cape province of South Africa with a net generation capacity of 50 MW with 9.3 hours of thermal energy storage. Once completed it will be a CSP power plant with the longest amount of thermal storage in the world.