About 100 people attended a community celebration in Port Augusta on September 2 to mark a huge win for the local community: the state government’s support for Australia’s first solar thermal power plant with storage in Port Augusta.

This was the culmination of a seven-year campaign and it will have a far-reaching impact on the future of renewable energy in this country. US company SolarReserve will begin construction of the 150MW plant in 2018. It is expected to be completed in 2020.

The diversity of the campaign was reflected at the celebration: representatives from around the country and a range of organisations were present, including Doctors for the Environment, the Australian Youth Climate Coalition (AYCC), the Australian Services Union and Solar Citizens.

Gemma Weedall from Climate Emergency Action Network (CLEAN) and Socialist Alliance and Mark Ogge from Beyond Zero Emissions provided an insight into the early days of the campaign. Kelly Mackenzie from AYCC shared memories of the Walk for Solar from Port Augusta to Adelaide in 2012.

Gary Rowbottom, a former Port Augusta power station worker and chair of the local Repower Port Augusta group spoke movingly about what it meant for him and his town to see this project finally becoming a reality. 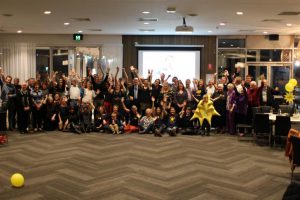 Below is an abridged version of the speech given by Gemma Weedall.

My involvement with this campaign started in late 2009 as part of the Climate Emergency Action Network. We were inspired by the Beyond Zero Emissions Zero Carbon Australia report that provided a blueprint for achieving 100% renewables in 10 years. The report identified Port Augusta as an ideal location for one of the many concentrating solar thermal plants it proposed to be built around the country.

Over a few weekends, a small group of CLEAN activists travelled up to Port Augusta from Adelaide and went about doorknocking the suburb of Stirling North, close to the coal-fired power station, to engage with locals around this idea.

We encountered our fair share of hostility and resistance to change and were told we were wasting our time. Many asserted that the coal power station would be around for decades to come.

But we also spoke to plenty of people who were open to the idea and invited us into their homes for a chat and a cup of tea.

I remember meeting a man who showed us a bottle of water he had collected from his rainwater tank. It was pitch black with fly ash from the coal stacks. We met parents of kids with severe asthma, which they attributed to exposure to air pollutants from the power station; nurses who spoke about the higher than average cancer rates in the town; and even workers from the power station who acknowledged that the coal reserves wouldn’t last forever, and alternatives needed to be explored.

It soon became evident that the benefits of this proposal went well beyond the environmental and climate impacts: replacing the coal power station with solar thermal would also have insurmountable benefits for community health, jobs and regional development.

Over the next few years, we held stalls outside of the local supermarket, arranged meetings with the local council and held community meetings and forums on the issue.

The first public meeting we organised was attended by just three locals! It would have been easy to get disheartened and give up, but we were convinced that this proposal was important.

This is an important lesson to draw: sometimes it is important to stick it out through the low ebbs, before a breakthrough moment is reached. From little things, big things grow.

The breakthrough came in 2012, when there was a sharp increase in interest and activity. This was the year the Repower Port Augusta Alliance was formed; a specific report on the Port Augusta proposal was launched by Beyond Zero Emissions; a community vote revealed strong local support for the proposal; and a walk from Port Augusta to Adelaide (more than 300 kilometres) was organised to raise awareness of the campaign. This walk culminated in a rally of more than 1500 people in Adelaide, hosted by celebrity scientist Dr Karl Kruszelnicki.

One of the biggest milestones that year was the formation of the local Repower Port Augusta action group.

From the start we were aware that while this campaign needed strong support from activists in Adelaide and around the country, it would only have a chance of winning if it was driven and led by the local community.

Congratulations to the hard-working local group, supporters from Adelaide and interstate and all the organisations that have been involved. We should all be proud of this great success, which we were only able to achieve by working together for a common cause.

This is a massive win for the climate, jobs and health. Now we need to campaign to get more solar thermal plants and other renewable technologies rolled out around the country until we are powered by 100% renewable energy. Let this be a reminder that people power can and will change the world!

[For more about the early days of the campaign see “The community campaign that won solar thermal in Port Augusta” by John Rice, a founding member of CLEAN. Another celebration will be held in Adelaide on September 15.]