lying over the southwestern United States, a dazzling light shines on the wilderness of the Mojave Desert in the distance. Three luminous dots hover on the horizon, and each dot is surrounded by a gleaming field.

These are the towers and mirrors (heliostats) of the Power Station, one of the largest concentrating solar power plants on the planet. What is this technology that allows solar energy to continuously generate electricity at night, and how does it work? 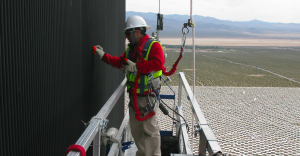 Traditional photovoltaic (PV) solar cells absorb sunlight and discharge electricity. Light particles (photons) emitted by the sun travel through space, pass through the Earth’s atmosphere, and then hit solar panels. Some photons are reflected off the panel and lost. Most of them are absorbed by the atoms of the panel and then release electrons. The electrical design of solar cells collects these electrons and exports them as current. Further electrical equipment converts this low-voltage direct current (DC) into high-voltage alternating current (AC) for transmission through power transmission lines.

Concentrated solar thermal (CST) power plants do not directly exchange solar photons for electrons. They collect photons and use them to heat water, which drives the steam turbine to run, which in turn drives the generator to run. This is the same way that nuclear fission and fossil fuel power plants generate electricity-the difference is that uranium, coal or natural gas is replaced by the heat of the sun’s rays.

The basic design of a solar concentrator is simple. A series of heliostats are built on the ground. A heliostat is a term for a mirror on a rotating support that can track the sun. These arrays cover hundreds of acres, roughly comparable to large traditional solar power plants of similar capacity. Each mirror is constantly adjusted so that the direction it points at bisects the angle between the sun and the huge power tower.

Approaching the central tower, the sunlight gathered by thousands of mirrors became extremely bright. It can be seen from miles away. This intensity of sunlight eventually promotes power generation. At the top of the tower is a white «transparent box» that absorbs the sunlight converged by the mirror.

Compared with traditional photovoltaic solar cell technology, solar thermal concentration provides a major advantage: dispatchability. A properly configured CST plant can heat molten salt above 1,000 degrees Fahrenheit, thereby storing large amounts of heat energy. The liquid salt is then pumped into a storage tank to act as a kind of battery. When sunlight is unavailable (about half of the time), the stored sunlight energy can be drawn from the water tank and used to power the turbine generator to provide power on demand at night.

Currently, CST power generation installed globally is relatively low. Although the technology has developed a plan to advance it, the current cost is too high to compete with standard photovoltaic cells. Many countries, including Israel, the United Arab Emirates, Morocco, China, Chile, Spain, and India, have built huge power tower installations.

Although the cost of centralized solar thermal power generation is getting lower and lower, the cost of photovoltaic cells is also falling rapidly. The future of this energy is likely to depend on the continued development of its dispatchable power storage capacity, which needs to fill inconsistent wind turbines and photovoltaic solar power plants.

The options for storing energy are very limited today. Lithium-ion technology has many shortcomings that hinder countries from using battery power. Like batteries in laptop computers, they are expensive, degrade drastically over time, and easily catch fire. The global production capacity is too small to complete this task, and China, which controls half of the world’s lithium mines, dominates the lithium-ion battery market, accounting for more than 60% of the global production capacity.

The newspaper pointed out that the lithium battery industry seems to be at a critical point. Since 2010, the cost of lithium battery has dropped by nearly 90%, and it is affecting the global transportation market, and may reshape the global industry in the next few decades. It is estimated that by 2025, China’s lithium battery production capacity will reach 1,811GWh, accounting for 73% of the global share.

Future trends indicate that lithium-ion batteries will replace more lead-acid batteries in transportation and heavy equipment. The shift to lithium batteries has brought many new challenges and opportunities, and China is taking another clean energy manufacturing opportunity in its hands.