Global CSP capacity hit 4.95 GW at the end of 2017, according to the International Renewable Energy Agency’s annual report on global renewables capacity.

The 100 MW Xina plant in Pofadder, South Africa was the only CSP plant to begin commercial operations in 2017, marking the slowest year for the industry since at least 2008, when IRENA began keeping records. 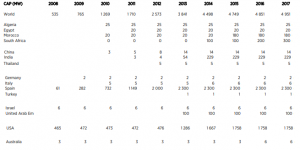 Spain and the U.S. account for more than 80% of global CSP capacity (Source: IRENA)

Global CSP capacity is expected to grow significantly in the coming years, with China alone planning to add 5 GW by 2020. Several projects are on schedule to become operational this year, including the 200 MW Noor 2 and 150 MW Noor 3 projects in Morocco, and the 100 MW Shouhang Dunhuang project in China. There are 16 pilot plants under construction or in planning or development in China (after four were recently shelved from the original list of 20). Outside China, several projects are either under construction or about to begin construction, including the 150 MW Aurora project in Australia, and the 700 MW fourth phase of Dubai’s Mohammed bin Rashid Al Maktoum Solar Park.