Slag is the steel industry’s biggest waste byproduct. It could find a use: to cut the carbon emissions from steel production

Starting this year, thermal energy researchers in Spain’s Basque Country will test the use of slag as thermal energy storage within the steelmaking process, to cut the use of fossil fuel for heat for the world’s largest steel producer, Arcelor Mittal.

Slag is the most widely-generated waste byproduct of the iron and steel industry, with about 20 million tons generated annually. While these small grey pebbles can be used in road building, much of it goes to waste. But ceramic materials like this are good candidates for thermal storage, in slag pebbles of between 1 and 3 cm. Slag has a specific heat capacity of 810 kJ/kg·K and density of 3980 kg/m3.

“We have constructed a 1MWh thermal energy storage tank in Arcelor Mittal steelworks in Sestao, in Spain, that will start its operation at the end of February. We’ll have an idea, and get results on emissions cuts by July,” said engineering PhD Dr. Iñigo Ortega-Fernández, who presented the results of the team’s initial investigation at smaller scale at the SolarPACES conference in Morocco, in a paper titled Experimental validation of steel slag as thermal energy storage material in a 400 kWht prototype.

Arcelor Mittal’s Basque Country Sestao plant produces almost 2.5m tonnes of steel a year. But the European steel industry needs to cut its carbon emissions, because like other nations in the EU, Spain operates under the ETS (emissions trading system). There are many steelworks in the Basque Country in Spain, where this research is being carried out through the energy research center CIC Energigune.

“This is one of the main objectives of the Basque government, to help the local industry to contribute to the circular economy,” said Ortega. “Something like 20% of the slag produced worldwide is going to landfill, so it is a low-cost material. The cost is only related to transport from the steelworks to where the system or the CSP plant is, so its cost is almost zero.”

How steelworks could cut the use of fossil fuels, with thermal energy storage 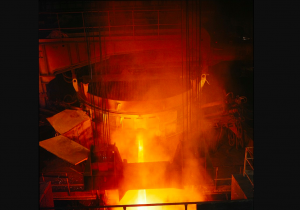 The main steelworks process, feedstock’s melting, is carried out in electric arc furnaces. The steel plant where the demonstration will take place has two of these furnaces that operate 24 hours per day using electricity to melt steel scrap. Before being fed to these furnaces, the steel scrap is pre-heated and in the current steelworks configuration, the required heat for this process is supplied by burning natural gas.

But, instead of burning a fossil fuel for the scrap pre-heating, the research team investigates storing the waste heat, which exits at over 1000°C from the electric arc furnace, in a 1MWh thermal energy storage tank filled with slag. Then, later, instead of burning natural gas for the pre-heating of the next batch of steel scrap, tapping that stored heat. Until now, no monetary value had been ascribed to this waste gas in steel production.

For the first tests, the team had demonstrated a cutting edge thermal storage technology at the Air Test Loop facility at CIC Energigune, where it is possible to test thermal storage systems at a wide variety of air speeds and temperatures. While the validation was carried out at 400kWht, the 2019 test will be at twice the capacity:1MWht.

“We are 100% sure that this technology is compatible with air. We are demonstrating it in the pilot that we are constructing,” said Ortega. While any success with slag and air in thermal energy storage will also be applicable within a CSP plant, for this test, the technology is being considered as standalone heat storage inside a steel plant, to cut the carbon emissions of steel production.

Fed by exhaust gases emitted at very high temperature, up to 1000°C, the demonstration plant, incorporating a slag-based thermal energy storage tank of 5 m in height and 1.5 m diameter, would be adjacent to the electric arc furnace in the steel plant, and hold the thermal storage. Stored heat will be tapped when needed to pre-heat scrap, replacing natural gas.

Before storing this heat, it must be transferred to air, as the exhaust gases present high dust content and corrosive compounds. “This is one of the major insights of this process,” he explained. “These gases have a very harsh composition, so it is not easy to transfer its heat content to another fluid. It is not the case that you can take the gases from one side of the plant and directly conduct them to another point. In this sense, we have designed a complex heat exchanger to transfer the heat to atmospheric air.”

This heated air will circulate through the empty spaces between the slag pebbles so the heat is transferred to the slag, he said: “The tank is practically filled with 65% of slag particles and 35% of air. The air circulates through the voids left by the 1 to 3 cm slag particles.”

“Slag can withstand up to 1100°C before melting, but considering the steel construction material of the tank, we are limiting this application to 800°C, which is not as high as some of the other particle R&D projects, because at higher temperatures the steel of the tank suffers from mechanical stresses,” he added.

CSP could also use slag as a thermal storage material 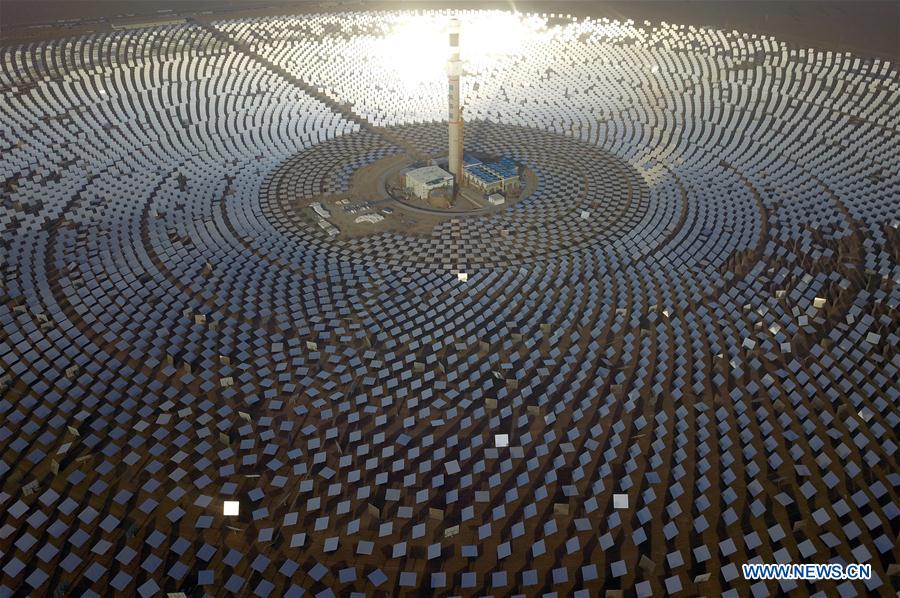 Thermal energy storage is a crucial component in a 100% clean energy future because it enables night solar in a CSP plant. If the test is successful, it will indicate that slag particles could also be used as the storage media in tower CSP, with air as the heat transfer fluid.

Thermal storage in particles, using air for heat transfer, is among the avenues of research being explored by a network of international solar thermal energy researchers, for its potential in further lowering costs in Concentrated Solar Power (CSP) tower technology.

The research interest in packed bed heat storage systems, with air as heat transfer, is that it enables the use of just one tank for heat storage, instead of a separate hot and cold tank like in current molten salts systems, cutting costs. The particles are heated from the top of the tank by the hot air in a continuous process, so the hottest material is always on the upper part of the tank, and the coldest part on the bottom.

There are two main reasons to consider the slag as cost effective storage solution, he pointed out: “One is the cost of the material. It is almost zero. Secondly, it allows to move from a double-tank technology to a single-tank system. Hence, both the construction of one tank, and its storage material is avoided. Both aspects have an implicit cost reduction.”

Next: Could thermal storage in slag cut fossil energy use in other industries requiring heat?

By July, the test should show whether this technology can work and analyze how much it can cut steel CO2 emissions. “We started this project to see whether we will be able to reduce the use of fossil fuels by as much as 80%,” he said. “Once we start, we’ll be able to evaluate that. We’ll have real numbers by the end of the test campaign in July.”

The trial is funded by the European Commission (REslag – 642067) because standalone thermal energy storage with slag has the potential to cut the use of fossil fuel not only in the steel industry itself, but also in other heavy industries that need high temperature heat, like cement making. Ortega concluded: “The main objective is to demonstrate that this technology (slag-based packed bed) works at the industrial level. The next steps will be to introduce this technology also in other sectors.”