A new study has pointed out ways through which China can cut its climate action costs – by going for solar thermal energy.

The study recommends that China’s power systems operators must invest in renewable energy to meet climate commitments. Wind power and PV are the lowest cost renewables, but they only deliver power when it’s windy or sunny. Concentrated Solar Power (CSP) is capable of storing its solar energy relatively inexpensively, and for long durations, can deliver power at any time, day or night.

Surprisingly, even though it’s more expensive, CSP could ultimately prove less costly for a power system with a lot of renewable energy because of its ability to dispatch its solar power day or night.

The study finds that if CSP were substituted for between 5% and 20% of planned PV and wind power in Gansu Province and Qinghai Province it would bring the greatest benefit to power systems operators, reducing curtailment of wind and PV while lowering the operational costs of base load coal generators, that must ramp up and down to ameliorate fluctuating generation from solar and wind.

A research team from Beijing’s Tsinghua University report their findings in the July issue of the journal Applied Energy, in their paper titled Economic justification of concentrating solar power in high renewable energy penetrated power systems. They analyzed the cost-benefit of various levels of CSP in place of planned Variable Renewable Energy (VRE) like PV and wind. 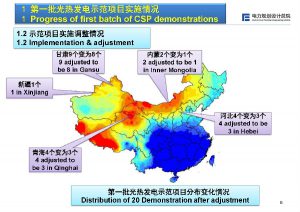 In two provinces in particular, Qinghai and Gansu, which plan to supply 83% and 104% respectively of their maximum load with VRE, the authors found that substituting CSP for between 5% and 20% of VRE would result in the lowest cost to the system operator.