With more electricity disruptions likely to occur in the next few years as state utility Eskom struggles to meet demand, South Africa should look at concentrated solar power (CSP) technologies as an alternative when coal power stations fail, Stellenbosch University has said.

The university cited Dr Toyosi Craig, a project manager with AEE Power in Johannesburg who recently received his doctorate in industrial engineering at Stellenbosch, as saying mass deployments of CSP would not only provide clean and supporting energy to the grid, but also boost the local manufacturing of CSP components, support job creation and create an avenue to export electricity and know-how to neighbouring countries. 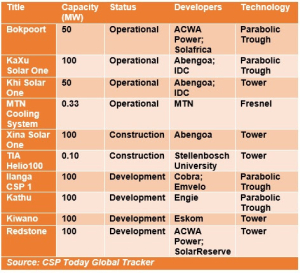 “This is worrying given that South Africa wants to generate 42 percent of its electricity from renewable energy technology sources by 2030,» he said.

He said if CSP was promoted, job losses due to the adoption of renewable energy would be reduced as experts from other conventional technologies could transfer their skills «with little or no training».