The concentrated solar power player eSolar, one of just three remaining companies in the U.S. specializing in tower designs, appears to have ceased operating.

Although Gross and Rogers still cite eSolar as their current employer on their LinkedIn profiles, and the business is listed among Gross’ Idealab incubator startups, the company’s website delivers a blank page with the words «Please come back later.» 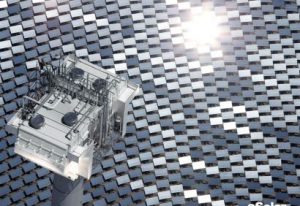 The Burbank, California-based business has fallen out of the news cycle since closing $22 million of a $30 million funding round in 2013. But before then, the company had been credited with bringing to market a potentially groundbreaking modular power tower technology.

In 2007, when eSolar was founded, the CSP industry was entering its second phase of maturation, characterized by the evolution of technologies developed during the 1980s and ‘90s.

The genesis of the industry last century led to a range of CSP technology concepts, from solar chimneys to linear Fresnel designs, with California’s Solar Energy Generating Systems parabolic trough plant leading the way in terms of size and performance.

In the 2000s, parabolic trough emerged as the design of choice for CSP. But Spanish and American developers began investigating a new concept, power towers, which promised higher efficiencies by focusing the full force of an entire solar field onto a single central receiver.

Companies including BrightSource Energy and SolarReserve in the U.S. and Abengoa and Sener in Spain pursued large-scale power tower projects that offered attractive economies of scale but were fraught in terms of permitting and financing.

Meanwhile, eSolar chose to commercialize a smaller-scale, modular plant design starting at 46 megawatts, with mass-manufactured heliostats to cut the cost of the solar field. Each 46-megawatt unit was intended to have 12 towers with their corresponding heliostat fields.

Under the aegis of internet entrepreneur Gross, eSolar pulled in funding from the likes of Google, Oak Investment Partners, NRG Energy, GE, ACME Group and Quercus Trust. By 2011 it was reported to have raised $182 million.

It also made headlines in 2010 by becoming the first Western firm to break into the Chinese CSP market, under a deal to develop up to 2 gigawatts of generating capacity with China Shandong Penglai Electric Power Equipment Manufacturing.

In 2013, eSolar’s name was attached to several other CSP projects worldwide, including the Gaskell, Alpine and Sierra SunTower plants in the U.S., the Dervish project in Turkey and the Acme Rajasthan Solar Power 1 plant in India.

Of these, only the Sierra SunTower and Acme Rajasthan Solar Power project are thought to have been completed.

And while eSolar’s concept was praised for its potential to avoid the gargantuan project development challenges facing larger plants, not everyone was convinced by the technology.

This was particularly the case at the turn of the decade, when it became apparent that the only way CSP could overcome competition from cheaper PV would be to add thermal storage into the equation.

“The big challenge for CSP is the cost comparison with PV, in light of the dramatic cost reductions in PV over the last few years,” said Kevin Smith, SolarReserve’s chief executive.

Elsewhere, research suggested that eSolar may have gone below the solar field optimum size with its modular approach.

A study led by Dr. Luis Crespo, president of the European solar thermal association ESTELA, found that even in hazy locations plant designers should aim for around 30 megawatts of solar field per tower. ESolar’s “was an unfeasible concept,” Crespo said.

It is rumored that eSolar may have let go of most of its staff at the end of last year. It is not known whether the company’s assets or intellectual property were acquired by a third party.