The outlook is particularly positive, according to IRENA, for solar thermal technologies using molten salt: “The transition to the use of molten salt… means that a much higher cost reduction potential exists,” the report says.

“By 2025, the use of molten salt …will raise operating temperatures and allow the storage medium requirements to be decreased by around half while maintaining the same number of hours of operation. As a result, the installed costs of the storage medium (per kWh-thermal) for a … system using molten salt … are around 50% lower compared to the 2015 reference.”

Producing electricity from the sun and wind is about to get even cheaper around the world with the UAE helping to further drive down costs, according to the International Renewable Energy Agency (Irena).

The Abu Dhabi-based organisation released a report on Wednesday projecting the cost of renewable energy to drop, in some cases by more than half the price of current averages by 2025.

“Given that solar and wind are already the cheapest source of new generation capacity in many markets around the world, this further cost reduction will broaden that trend and strengthen the compelling business case to switch from fossil fuels to renewables,” Irena director general, Adnan Amin, said on the release of its report The Power To Change: Solar And Wind Cost Reduction Potential To 2025. 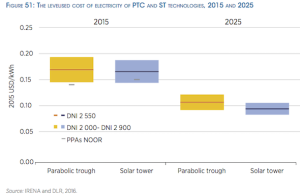 The levelised cost of electricity, or a measure of comparison for various power generation methods, for wind could fall by 35 per cent. However, the major winner in terms of lower costs is solar, including photovoltaic (PV) and concentrated solar power (CSP) applications, which could drop by as much as 59 per cent and 43 per cent respectively during the next 10 years.

The cheaper rates for solar appli­cations can be attributed to evolving technology as well as the wide scale rollout. The UAE is leading the charge in the region. Dubai is developing a 5 giga­watt solar park using a mix of PV and CSP and has been driving down prices with record low bids submitted for its construction phases for PV. Michael Taylor, Irena’s renewable costing analyst, said that CSP had more room to drop in pricing as only 5GW was installed worldwide by the end of last year, compared to 220GW of PV.

“Dewa’s recent announcement of a first tender for 200 MW of CSP to be operational in 2021, is another reminder that CSP can offer competitive electricity and generation flexibility in areas with excellent solar resources, strong civil engineering companies and a stable regulatory and financing environment,” he said. “Projects with access to lower costs of capital, as might be expected for many Gulf countries, could see electricity costs even lower than this range.”

The average costs for electricity generated by solar and wind technologies could decrease by between 26 and 59 per cent by 2025, according to a report released today by the International Renewable Energy Agency (IRENA). 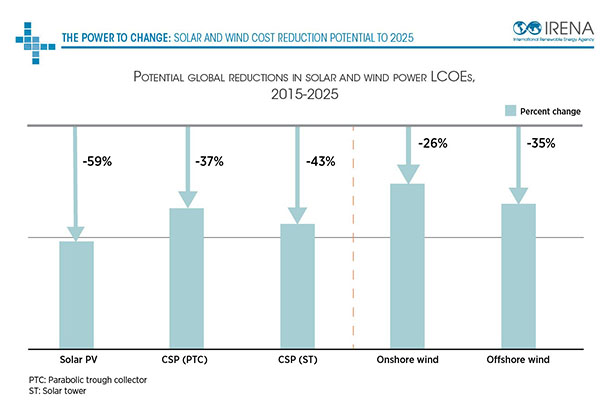 The average costs for electricity generated by solar and wind technologies could decrease by between 26 and 59 per cent by 2025, according to a report released today by the International Renewable Energy Agency (IRENA). The report, The Power to Change: Solar and Wind Cost Reduction Potential to 2025, finds that with the right regulatory and policy frameworks in place, solar and wind technologies can continue to realise cost reductions to 2025 and beyond.

It estimates that by 2025, average electricity costs could decrease 59 per cent for solar photovoltaics (PV), 35 per cent for offshore wind, and 26 per cent for onshore wind compared to 2015. Electricity prices for concentrated solar power could also decrease as much as 43 per cent, depending on the technology used. By 2025, the global average cost of electricity from solar PV and onshore wind will be roughly 5 to 6 US cents per kilowatt hour.

“We have already seen dramatic cost decreases in solar and wind in recent years and this report shows that prices will continue to drop, thanks to different technology and market drivers,” said IRENA Director-General Adnan Z. Amin. “Given that solar and wind are already the cheapest source of new generation capacity in many markets around the world, this further cost reduction will broaden that trend and strengthen the compelling business case to switch from fossil fuels to renewables.”

Since 2009, prices for solar PV modules and wind turbines have fallen roughly 80 per cent and 30 to 40 per cent respectively. With every doubling of cumulative installed capacity, solar PV module prices drop 20 per cent and the cost of electricity from wind farms drops 12 per cent, due to economies of scale and technology improvements. Importantly for policy makers, cost reductions to 2025 will depend increasingly on balance of system costs (e.g. inverters, racking and mounting systems, civil works, etc.), technology innovations, operations and maintenance costs and quality project management. The focus in many countries must therefore shift to adopting policies that can reduce costs in these areas.

“Historically, cost has been cited as one of the primary barriers to switching from fossil-based energy sources to renewable energy sources, but the narrative has now changed,” said Mr. Amin. “To continue driving the energy transition, we must now shift policy focus to support areas that will result in even greater cost declines and thus maximise the tremendous economic opportunity at hand.”

The Power to Change, is the first of several solar-focused publications IRENA will release this summer. Future reports include Letting in the Light: How Solar Photovoltaics Will Revolutionize the Electricity System – which provides a comprehensive overview of solar PV across the globe and its prospects for the future – and a report on end-of-life management for solar PV panels. Both reports will launch at InterSolar Europe, taking place in Munich, 21-24 June.

Increasing economies of scale, more competitive supply chains and further technological improvements will continue reducing the costs of solar and wind power. The same factors will also boost the availability of these key renewable power sources at night and in varying weather conditions.

With the right policies in place, the cost of electricity from solar and wind power technologies could fall by at least 26% and as much as 59% between 2015 and 2025, finds this cost-analysis report from the International Renewable Energy Agency (IRENA).

The global weighted average cost of electricity could fall by 26% from onshore wind, by 35% from offshore wind, by at least 37% from concentrating solar power (CSP) technologies, and by 59% from solar photovoltaics (PV) by 2025, the report finds.

In energy markets around the world, rising competitive pressures that will drive continual innovation. While equipment costs will keep declining, reductions in balance-of-system, operation and maintenance and capital costs are becoming increasingly important drivers for overall cost reduction.