The IEA reports that PV could provide 16% of the world’s electricity and concentrated solar power (CSP) could provide another 11%.

The International Energy Agency (IEA) reports that PV could provide 16% of the world’s electricity and concentrated solar power (CSP) could provide another 11%. The report expects PV to dominate solar up until 2030 when the addition of storage to CSP will see it close the gap. 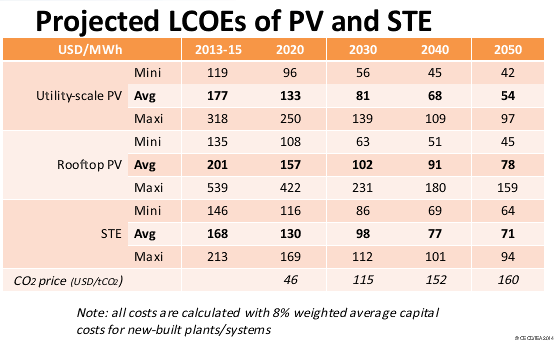 Combined, these solar technologies have the potential to avoid 6 billion tonnes of carbon dioxide emissions per year by the middle of the century says the International Energy Agency (IEA).
Two IEA technology roadmaps unveiled yesterday detail technology improvement targets and the policy actions required to achieve this. The level is entirely achievable – the IEA points out its PV Roadmap in 2010 set an ambitious benchmark of 200 gigawatts of cumulative capacity deployed globally by 2020; a goal that will be reached next year. 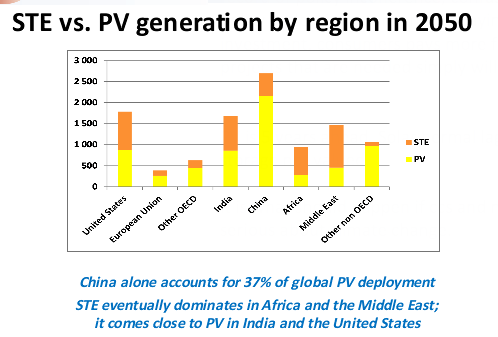 137 GW of PV capacity was installed worldwide at the end of 2013 and up to 100 MW of solar panels are being added each day. The IEA sees the 2050 scenario resulting in over half of total capacity installed at the point of consumption – homes and commercial buildings.
The roadmaps forecast solar PV capacity to outpace solar thermal technologies out to 2030, when “massive-scale” STE deployment takes off due to CSP plants’ built-in thermal storage.
In launching Solar Roadmaps 2014, Executive Director of the IEA, Maria van der Hoeven, said there were three main recommendations for policy makers.
First, long term targets for solar electricity must be set or updated that take into account cost reductions already achieved and potential further reductions.
Second, solar technologies need to be progressively exposed to market signals, but taking into account the impacts and value of distributed residential and commercial solar generation; plus differentiating remuneration for generation during peak hours in the late afternoons and evenings.