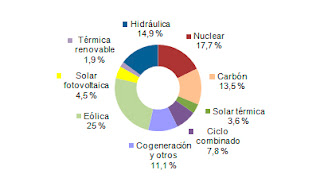 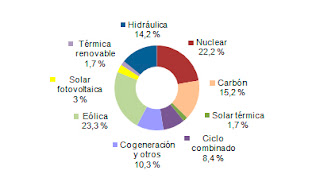 Generation from January to May 2015 Peninsular electricity demand in the month of May, after taking into account calendar effects and temperatures fell by 0.6% over the same month last year. Gross demand was of 18,607 GWh, 2.1% higher than in May 2014. In the first five months of the year, corrected for calendar effects and temperatures, consumption was 0.6% higher than last year. The gross electricity demand in this period was 102 020 GWh, 1.7% more than in the same period of 2014. The production of wind power, with data on May 29, has reached 4,662 GWh, up 20.8% from the same period last year and has made 25% of total production. In the first 29 days of the month, the generation from renewable energy represented 49.9% of production. 65.7% of electricity production for this month came from technologies that do not emit CO2.
David Llamas2016-12-27T14:57:47+00:0004-06-2015|Categorías: NEWS|Etiquetas: Concentrated Solar Power, Concentrated Solar Thermal Power, Concentrating Solar Power, CSP, electricidad, España, REE, solar energy, solar power, termosolar|