Spain has a larger portion of Concentrating Solar Power (CSP) in its electricity mix than any other nation on earth.

This is a significant increase from the 3.6% and 1.3% of production that PV and CSP represented in April 2013. Spain has the largest CSP capacity of any nation on earth, and CSP likewise meets the largest portion of demand of any nation.

When wind and renewable thermal sources are added, non-hydro renewables comprised 28.5% of generation during April 2014, and when hydroelectricity is added this rises to 54%. Spain has one of the highest portions of non-hydro renewable energy in its electricity mix of any mid-sized to large nation on earth.In April 2013 renewables likewise made up 54% of generation, due to higher wind output. 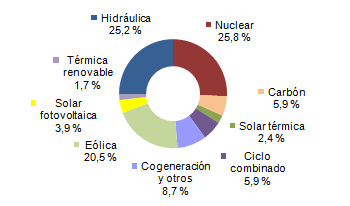 Wind energy makes up for lower solar output during winter months. Over the first four months of 2014, the shares of generation from PV and CSP were only 1.7% and 1.2%, respectively. However, due to strong wind output non-hydro renewables comprised 30% of generation, and all renewables again came in at 54%.

This is similar to the experience in Germany, where higher wind output tends to compensate for lower PV output during winter months, although the daily profiles of each form of generation is very different.

In contrast to the remarkable success of Spain’s solar industry, the nation’s current center-right government and former left government have both enacted retroactive changes to support levels.

This has destroyed investor confidence and created a crisis in the sector, including causing the world’s largest CSP maker, Abengoa SA (Seville, Spain) to abandon the domestic market.