Its chairman John Hewson, a former federal Liberal leader, will announce more details of the plan in Adelaide in coming days.

Solastor’s plan involves concave mirrors that focus sunlight onto a 10 tonne receiver made of graphite, which is heated to 800 degrees Celsius.

The heat is then used to create steam to power a 110 megawatt generator.

The company said stage one would be a 1 megawatt demonstration plant, which could be finished by the end of the year.

Another company also has solar-thermal plans for Port Augusta.

SolarReserve, of the United States, has been seeking federal support to build a plant that uses molten salt rather than graphite — a technology the company already uses in Nevada.

A concentrated solar power (CSP) expert from IT Power, Keith Lovegrove, said the technology would be important to the future of renewable energy, because power could be stored rather than needing the wind or sun at the time.

He said molten salt technology had become an industry standard. 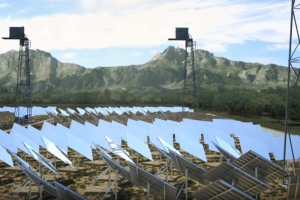 «That’s come to dominate the CSP (concentrating solar power) industry globally, but it’s certainly by no means the only way to store energy — there’s many companies and research organisations looking at alternatives,» he said.

Dr Lovegrove said there was no reason not to have two new power stations at Port Augusta.

«There’s plenty of land in that region of South Australia. It’s a perfect location if we can just get started on the first plant, that’s part of a pipeline of building, maybe dozens,» he said.

[As for the] proposal for a 100 megawatt plant with 10 hours’ storage, we would need to build 10 of those to replace one large east coast coal-fired power station.»

The Federal Government has promised its Clean Energy Innovation Fund will invest up to $100 million annually in emerging technologies, with some experts confident solar-thermal could see that benefit.

«It’s very encouraging that this is now back on the radar screen because people were in danger of forgetting about the concentrating-solar option,» Dr Lovegrove said.

«We’ve got basically bipartisan support federally in this election now to support something in South Australia — presumably by a competitive process.»

Port Augusta recently lost its coal-powered stations and the new plans might be a way forward.

Solastor said it would employ 300 people on the site and another 300 off site during construction, then use 100 full-time staff to operate a demonstration facility.

Similar projects by SolarReserve have created 1,000 jobs during construction.