The researchers predict the optimized dispatch software could help reduce CSP bid prices by some 25% and remove the need for fossil-fuel power capacity during high demand periods. 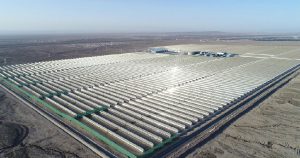 «SETO wants to stimulate significant, market-driven deployment of CSP with thermal energy storage in the United States,» he said.

The research will build upon non-linear solvers developed by the Argonne National Laboratory, probabilistic forecasting models by Northwestern University and dispatch optimization algorithms built by the Colorado School of Mines.

Historical data on areas such as cloud cover and temperature are used to build forecasts and uncertainty boundaries.

The uncertainty modelling has a major impact, increasing realized revenue by around 5%, he said.

CSP developers predict falling costs and growing wind and solar penetration could support a new wave of CSP development in U.S. and Europe.

The real-time optimized dispatch system will be most beneficial to CSP plants in markets with significant variations in electricity prices between daytime and night time periods, Wagner said.

“The California ISO market is a good example, because PV production has caused significantly reduced daytime rates,” he said.

California installed solar capacity was 22.8 GW at the end of June, of which around 10 GW was utility-scale capacity. SolarReserve is developing the 2 GW Sandstone CSP plant with 10 hours storage in Nevada, which will dispatch power to California during high demand periods in the afternoon and evening.

SolarReserve aims to achieve a price of «well» below $90/MWh for the project, Kevin Smith, CEO of SolarReserve, told New Energy Update in September.

If optimized dispatch software can reduce this price by 25%, that would put it at below $67.5/MWh. In comparison, Lazard consultancy estimates the generation cost of U.S. combined cycle gas plants at $41-$74/MWh and gas peaking plants at $152-$206/MWh, according to its latest figures.

Falling costs will push the price of PV with battery projects in the U.S. Southwest below gas plants within the next few years, without any state subsidies, Tara Narayanan, solar analyst at BNEF, said.

By considering the trade-offs between component performance and market factors, the software reduces the number of turbine starts which can accelerate damage and lead to additional maintenance costs, Wagner said.

A recent study by NREL and SolarReserve showed optimized immediate synchronization between production and dispatch can reduce annual turbine starts by 85%.

NREL has found that fewer turbine starts can increase annual revenues by around 8.5%, Wagner said.

Based on a plant with net revenue of $70 million per year operating over 25 years, the increase in revenues from fewer turbine starts could be around $150 million, he said.

“We are still working on quantifying these impacts,” he said.

Preliminary modelling shows a «significant reduction in overall cost of energy for hybrid CSP-PV plants without sacrificing reliability,” he said.