Wastewater treatment is an increasingly complex and resource intensive process. Many operators of wastewater processing plants have been looking for ways to lower their OPEX costs while using less resources and reducing the carbon print to carry out their cleaning process.

Three systems have been developed and installed in the last two years to treat wastewater by using processes powered by heat collected at concentrated solar systems, based in Sun2Heat® Linear Fresnel collectors:
In Surprise, Arizona, in June 2019 a 200kW CSP system was installed to supply heat to a heated drying bed system, for reducing the water content of urban wastewater sludge down to 10% from 80%. 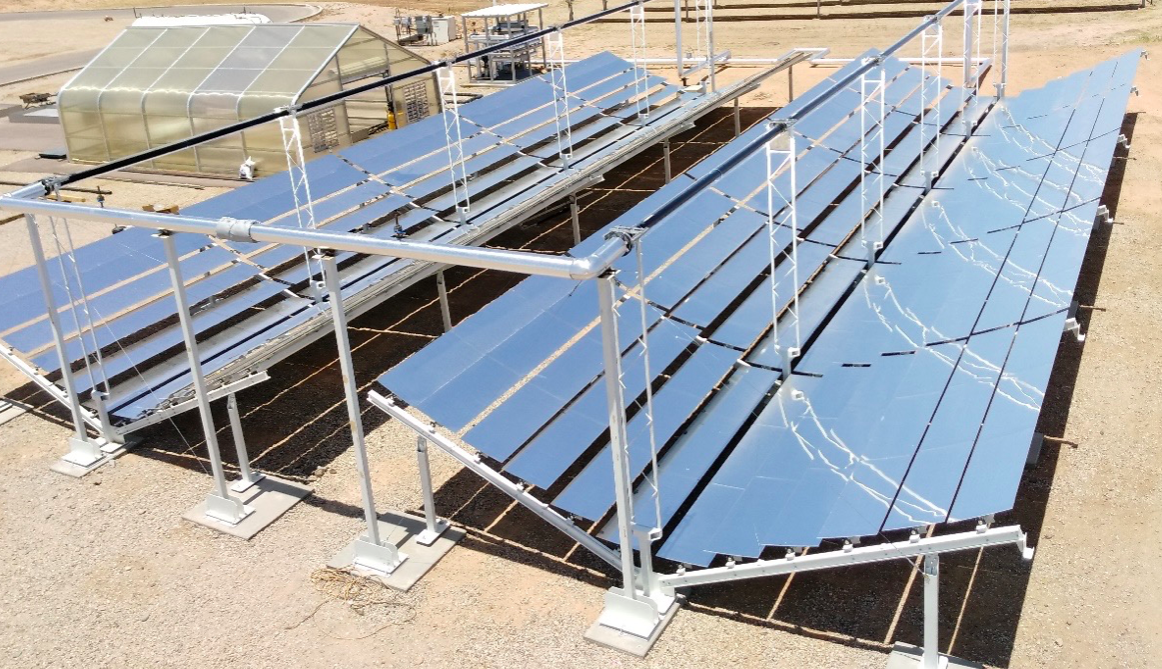 In early 2019, a 120kW CSP system was installed for Los Frailes copper mine near Seville to reduce the water content in the polluted mine lixiviates stored for years in the mine. The Fresnel solar thermal collectors supply thermal energy to a double-effect evaporator which produces distilled water from the mine’s wastewater and reduces the proportion of waste brine to 10%, recovering 90% of the initial waste as clean distilled water that can be reused in the process.

In March 2020, a 50kW CSP system was installed at Fundación CENTA near Seville (Project SECASOL) for powering a novel belt-type drying system for urban wastewater sludge and lixiviates, that reduces the moisture down to 20% from 80% and at the same time transforming the biohazard waste into non-toxic waste because the pathogens and bacteria are killed during the drying process into the solar-powered drying belt.

Those CSP-powered systems provide three major benefits. Firstly, the carbon emissions are reduced because of powering the process by solar heat, secondly the disposal cost of the resulting solid waste are reduced by 80 to 90% (both disposal and transport cost) because of the weight reduction of the waste in the solar drying process and third, the organic solid waste obtained can even be reused because the bacteria and pathogens are killed during the process.
Additionally, what is even more important in some remote, desert areas, the water removed from the waste effluent is recovered as distilled water and can be reused on site.
Other concentration processes can be driven by this solar thermal evaporation system, powered by solar heat. These include, among others:

Many of these new and promising applications are carried out in open evaporation ponds, where the evaporated water is released to the ambient air. If a solar thermal system is used, on top of the concentrated solid waste, clean distilled water is recovered from the process and the use of land is significantly reduced.

Awarded the CSP Today Industry Choice Award (2016) and the Technology Innovation Award twice (2011, 2013), Rioglass, headquartered in Brussels, Belgium, is an international company offering high-end receiver tubes and concentrating mirrors for concentrated solar power and concentrated photovoltaic technologies and is the world market leader for optical components in the CSP market.

Innovation is embedded in the company’s culture. Rioglass was the first company to introduce the tempered parabolic mirrors to the market, as well as the first to commercially deploy heliostat mirror facets with an integrated support structure. Rioglass Solar, through its acquisitions, was also at the cradle of the CSP deployment in the 1980´s and has since then led the innovation and introduction of new receiver concepts such a large aperture tubes and molten salts receivers.

Leaning on a strong engineering experience of over 30 years in the CSP and related industries, Rioglass is now the world leading supplier of concentrating mirrors and CSP receiver tubes, with state-of-the-art production facilities, and worldwide presence in the CSP and CPV market.

Rioglass offers the best economic solutions based on innovative designs and concepts, combined with a highly automated production capacity to deliver the most cutting edge, top performing products to its customers worldwide.