Concentrated Solar Power (CSP) With Storage Can Benefit the Grid

Concentrated Solar Power (CSP) With Storage Can Benefit the Grid

The evidence is piling up that when the real value of energy is considered, electricity generated from concentrating solar power (CSP) plants with storage capability outperforms solar photovoltaic (PV) and wind power.

Rigorous research studies cited throughout The Economic and Reliability Benefits of CSP With Thermal Energy Storage: Recent Studies and Research Needs, a report from the CSP Alliance, show that the services derived from ,Concentrated Solar Thermal Power (CSP) with storage add value not only to CSP, but to PV and wind as well.

This may be intuitively obvious, but a grid operator responsible for keeping the lights on and aware that the lights failing would be a career-defining moment will prefer this study to intuition. Cited studies from NREL, LBNL, and others document added energy value and capacity value from CSP with storage.

The benefits of a renewable energy plant can be quantified, the assessment argued, by a metric that measures the total economic value of each benefit per year divided by the total energy output from the plant in dollars or euros per megawatt-hour. The sum of these values allows for calculation of the net system cost, which is the sum of the costs minus the sum of the benefits. The net system cost required for a given level of output, operational performance, and reliability provides a basis for comparing energy sources, the report said. 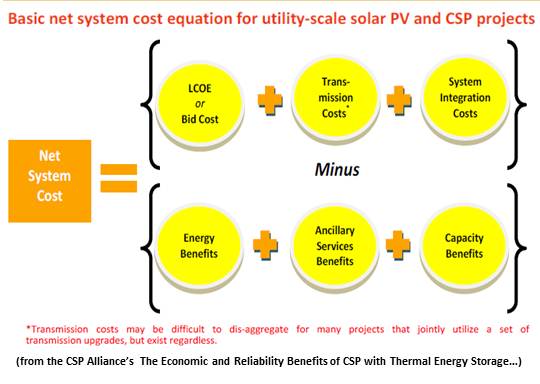 Energy value is the market price of the electricity sold into the power market.

The set of services to grid operators that CSP with storage provides — services that cannot be obtained at the same levels from PV and wind without large storage capability — can be used on a scheduled or unscheduled basis to balance variable resources and standard fossil and nuclear plants.

PV and wind without storage, among the renewables, lack the flexibility that CSP with storage has, and therefore cannot necessarily generate on a fixed schedule or in a sudden unscheduled event. In that sense, CSP with storage has the kind of value more commonly associated with a natural gas plant.

The CSP Alliance study pushed for utilities and regulators to use net system costs for valuing renewables. “Each renewable technology needs detailed simulations of its operations under a range of future scenarios for the grid, including comparison with the performance of alternative renewable technologies,” the study concluded. 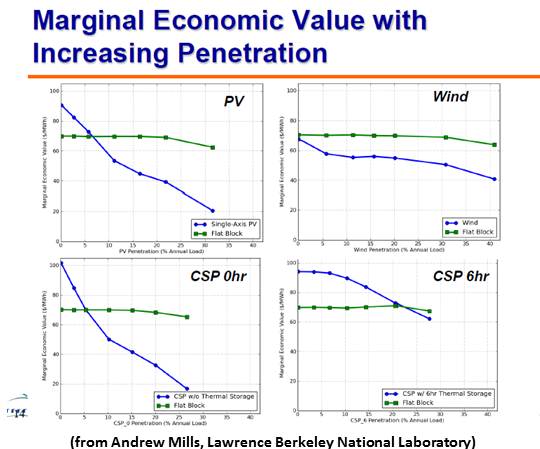 The report’s most noticeable shortcoming was inconclusiveness, which it acknowledged: “Nearly all of the referenced studies identified further analysis needed to better understand the implications to grid operation and performance due to variable solar and wind.”

A basic question that has not been answered, the report explained, is how much of imbalance needs should be attributed to renewables and how much to modern grid needs that are extraneous to the emergence of renewables.

There are plenty of specific applications in Europe and in wind-rich U.S. regions that indicate that the integration of renewables need not be burdensome to grid operators. But there are few if any examples of the use of CSP with storage to manage grid operations. In short, nothing was proved.

“The purpose of this report is to synthesize the current study findings and identify some additional research needs. A robust body of research is available and demonstrates that CSP with storage provides additional economic and reliability value to utilities and grid operators when compared to other renewable investments,” said BrightSource Energy’s Dr. Udi Helman.

As renewables reach 33 percent penetration on the grid, the assessment assumed, there will be an increasing “need for additional ancillary services, increased operational flexibility, and improved forecasting of wind and solar CSP with storage fits these forthcoming needs.” 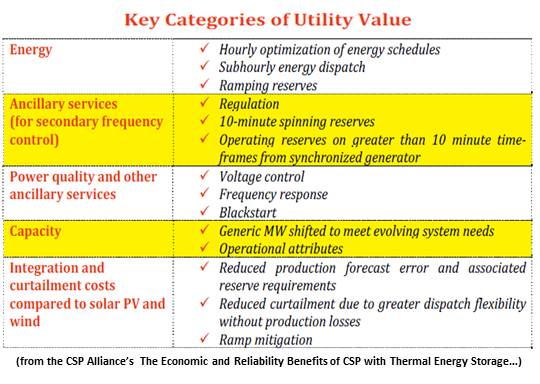