Last year, right after graduating from college, Hajar Abjeg left her vibrant hometown of Agadir on the west coast of Morocco to live in the middle of the desert in Ouarzazate. A newly minted engineer, her goal was to work at the sprawling solar complex on the outskirts of the city because, she said, it was the future.

“What’s exciting for me about this plant (is) that we use a resource that’s taken for granted… to produce something that is essential for us,” Abjeg said. “The more we study this kind of plant, the more we operate it, the more we find ways to make it as efficient as possible, and the less reliant (we are) on traditional energy-producing methods such as fossil fuels. And in the long term, that’s fantastic.” 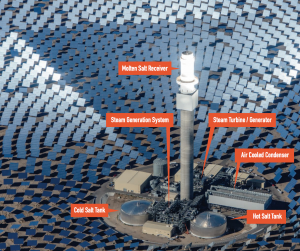 Abjeg is not alone in her optimism.

Concentrating solar power (CSP) is moving ahead in many countries, especially in the Middle East, North Africa and Latin America, where exceptional year-round solar resources and vast swathes of available land make it an attractive option, often over traditional sources of power such as coal and oil.

With thermal storage that is superior to batteries for bulk energy storage, CSP provides power that is dispatchable any time there is demand for electricity. The plants store heat from the sun in large tanks of molten salt – where it can be stored for hours, days or as long as needed — and turn it into electricity on cloudy days or during peak usage, which occurs at night for many countries in the Middle East and North Africa. This allows electric utilities to regulate electricity production and integrate other variable renewable sources of electricity – solar photovoltaic (PV) or wind – into their energy mix more easily.

In 2017, CSP had a global installed capacity of 5.1 GW. That number is expected to reach 10 GW by 2022, with almost all new capacity incorporating storage, according to the International Energy Agency. Worldwide, 23 countries have CSP projects. While the largest installed capacities are in the United States and Spain, there are CSP plants in operation or under development in numerous other countries, including the United Arab Emirates, Egypt, Israel, India, China, South Africa, Chile, Mexico, Australia, Kuwait and Saudi Arabia.

In Morocco, the Noor Ouarzazate CSP project is the country’s first utility-scale solar energy complex, and expects to reach over 500 megawatts (MW) of installed capacity, ultimately supplying power to more than 1 million Moroccans and contributing to Morocco’s goal of producing 42 percent of its electricity through renewable sources by 2020.

But while CSP will undoubtedly play a role in the energy mix for some countries, significant hurdles remain.

The high cost of setting up a CSP plant is one such challenge. CSP technology is expensive and more time-consuming to build than wind or solar PV. Developing countries already face difficulties in financing capital-intensive infrastructure, so for a relatively new technology like CSP, investment can be much harder to attract. In many cases, the World Bank and other international financial institutions have stepped in and provided concessional financing to help attract private investors and make the market for CSP competitive and drive down prices even further.

Concern around costs, especially when compared to solar PV, is also a hurdle. But prices are dropping – in 2017 the cost per kilowatt hour (kWh) fell to 6 US cents in Australia and 7.3 US cents in Dubai.  Also, as CSP has a built-in storage solution, the true comparison is against solar PV plus batteries – the price of which are also falling, but remain expensive. Without costly battery storage, PV often cannot deliver power when its value is highest—which is where CSP shines. It offers the guarantee of continuous electricity production – especially at night – something solar PV cannot do.

“The future of CSP is very bright,” said Abjeg. “When I first walked in here, (I saw) the sheer size of the plant and how much energy they produce. To produce that just from collecting sun rays – it’s amazing.”