The Institute for Solar Research tested the particle receiver CentRec for the first time with concentrated solar radiation in the DLR solar thermal power plant in October. In previous tests, the researchers had already irradiated smaller models under laboratory conditions with artificial sunlight. 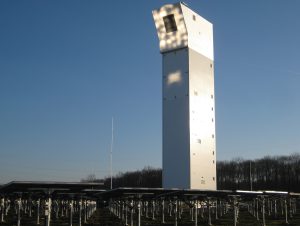 The central innovation of CentRec: ceramic particles of up to one millimeter in diameter in a rotating chamber receive the concentrated solar radiation and convert it into high-temperature heat. You can also save the heat and transport it in the power plant.

The ceramic particles are far superior to other storage materials in terms of their heat-absorbing capacity and storage capacity: they can reach and store a maximum temperature of over 1,000 degrees Celsius. For molten salts, which are mostly used as heat receiver and storage material in commercial solar tower power plants, the temperature limit is 565 degrees Celsius. The ceramic material is available at a cost lower than alternative materials.

Another cost advantage: In salt tower power plants, the molten salt in the heat receiver flows through metal pipes and heats up there by the absorbed solar radiation. With the CentRec concept, the ceramic particles absorb the solar radiation directly, ie without any previous heat conduction through metal structures. The cost of installing expensive metal tubes in the heat receiver is thus eliminated.

Since the particles can not freeze in contrast to liquid salt, also eliminates the otherwise necessary heating of pipes and components during downtime of the system.

The ceramic particles consist mainly of bauxite and can be used without danger to humans and the environment.

The new technology was designed for two applications, solar thermal power generation and the use of solar high-temperature process heat.

On the other hand, the new solar particle technology offers potential applications in the field of solar high-temperature process heat. An exemplary profitability calculation for use in foundry operations showed that the investment costs pay off within a few years.

Over the next few months, the receiver’s settings will be reviewed and any necessary changes made. The target of the solar researchers for the second test series in the spring of 2018 is the maximum temperature of 900 degrees Celsius.

For future commercialization of the technology scientists of the institute founded the company “HelioHeat”. For this purpose, license negotiations are currently being conducted with DLR.

The development of CentRec® technology was funded by the Helmholtz Validation Fund. The company was founded with the support of the Helmholtz Enterprise Fund.