Abengoa highlights the key role of hybridization for the energy transition during its participation in COP25. Miguel Méndez Trigo, director of Solar Technology of the company, described it as a key solution for decarbonization during his participation in the «Solar thermal electricity: an essential building block for the energy transition» panel, organized by the Estela association. 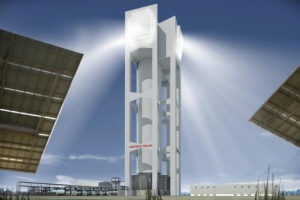 Abengoa participated in the panel «Solar thermal electricity: an essential building block for the energy transition», organized by the European Solar Thermal Electricity Association (Estela) and that took place today in the European Union pavilion during the celebration of its Day of Energy at COP25 in Madrid.

The director of Solar Technology of Abengoa, Miguel Méndez Trigo, participated as one of the keynote speakers in this panel dedicated to Solar thermal electricity: an essential building block for the energy transition» and in which the hybridization of renewable technologies was presented as a key element for decarbonization, as well as the role of concentrated solar power in order to achieve the objectives of the Paris agreement through the smart decarbonization of the power system.

Méndez Trigo highlighted that hybridization solutions can play a fundamental role in the energy transition and, in particular, to solve the challenges related to energy storage thanks to the combination of different renewable technologies, which makes possible a high capacity of design and allows to offer an optimal solution to any kind of need. «The key is in the hybridization of renewable technologies, see how they fit in the market to reduce emissions and give flexibility to the network,» he said.

One of the most important reference of hybridization is the Cerro Dominador solar platform (Chile), property of EIG Global Energy Partners, where Abengoa is currently constructing a 110 MW solar thermal plant and has already completed a solar photovoltaic plant of 100 MW. This platform has thermal energy storage system and batteries that will allow to produce 210 MW with 17 hours of storage – the world’s first truly dispatchable utility-scale renewable energy complex.

The panel discussion, which was moderated by the secretary general of Estela, Marcel Bial, counted also with the participation of the president of Estela, José Luis Martínez, the president of Protermosolar, Luis Crespo, the Chief Sales and Marketing Officer of Rioglasss, Jeroen van Schijndel, and a representative from the Spanish Ministry for Energy Transition, Miriam Bueno.

Abengoa has been the first company to hybridize solar with gas on a utility-scale project which is the world’s largest reference plant completed (470 MW) in Morocco (Ain Beni Mathar). The company was also responsible of developing the first hybrid solar-gas plant in Algeria, Hassi R’Mel, with a 150 MW capacity.

With its own solar thermal technology, Abengoa is a world leader in the construction of these type of plants, with 1.7 GW of installed capacity representing 34 % of the worldwide production. 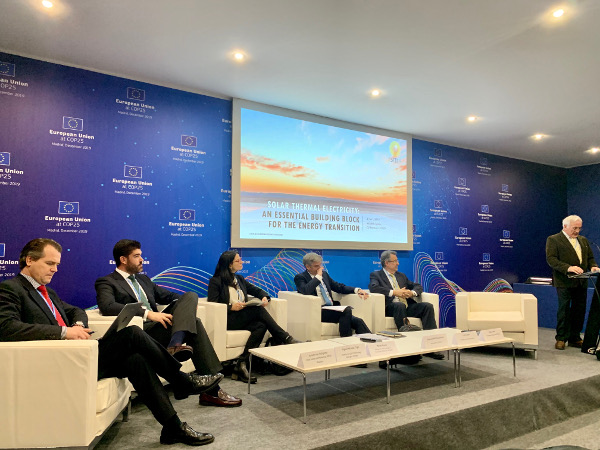 From left to right: the Chief Sales and Marketing Officer of Rioglasss, Jeroen van Schijndel, Abengoa’s Solar Technology director, Miguel Méndez, the representative from the Spanish Ministry for Energy Transition Miriam Bueno, the president of Estela, José Luis Martínez, the president of Protermosolar, Luis Crespo, and the secretary general of Estela, Marcel Bial.