At present, India has an energy shortage of about 24,000 million units. This does not include the estimated 20,000 million units required by 33% of the population who do not have access to electricity. Prime Minister Narendra Modi mentioned in his speech in London that “about 18,000 villages are without power even today”. Extending the grid distribution network is the conventional approach for rural electrification and its viability depends on the distance from the grid, location of the village, demand (number of households), among others. However, this is a very expensive option. For example, extending the grid by 25km to a village which has a population of less than 500 will entail a cost of Rs.12.22 per unit towards grids, resulting in a total energy cost of Rs.15.32 per unit. At present, Indian villages extensively depend on diesel pumps for groundwater extraction due to lack of reliable power supply. Decentralised power generation could be a potential solution where grid is expensive and quality of power is not achieved.

India’s national policies and many initiatives such as the National Action Plan on Climate Change, Nationally Determined Contributions (NDCs), renewable energy (RE) goals, among others, encourage low-carbon growth, and clean energy for various applications. At present, India has a target of 175 gigawatt (GW) of installed capacity from renewable energy by 2022, of which 100GW is to come from solar, 60GW from wind, 10GW from biomass and 5GW from small hydro. In addition, India’s NDC goal is to achieve 40% of total installed capacity (power generation) from renewable energy by 2030. There is, therefore, a great interest in adopting green energy technologies in the country.

Concentrated solar power (CSP), at a small capacity, could be a potential enabler for decentralised applications because it can be integrated to locally-available resources (biomass and biogas), fossil fuels (coal, natural gas and diesel) and other renewables (wind and solar photovoltaic). Thermal energy storage and hybridisation are the two main components for CSP technologies to be reliable power-generating systems. At present, India needs a sustainable and reliable decentralised power plant that can be replicated in many places in the country where the grid is not reached.

Worldwide, there are around 30 CSP plants of capacities less than 5 megawatt (MW), with a total installed capacity of 60MW. Solar hybrid gas turbine power plants are one of the potential solutions for decentralised power applications. This technology has been proven by many institutions at various levels (research and development, demonstration and commercial). AORA Solar Tulip Power, Solugas and Solstar are some examples. 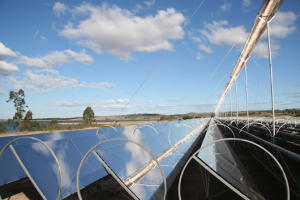 During a study conducted by the Center for Study of Science, Technology and Policy (CSTEP) on solar hybrid gas turbine systems, a power plant of capacity of 1.4MW was chosen for Indian applications, particularly as a captive power plant for rural areas. A techno-economic analysis for the candidate power plant was carried out, including a design of the solar field, the gas turbine system and other components. Detailed cost estimation for the power plant has also been carried out. To estimate the realistic performance of the plant, hourly direct normal irradiance for Jodhpur in Rajasthan was considered. The capacity utilisation factor (CUF) and the annual fuel consumption have been estimated for a solar load factor greater than 25%. It was found that a CUF of about 40% can be achieved with a total capital cost of Rs.26 crore per MW. The corresponding cost of electricity was worked out to be Rs.16 per kilowatt-hour and the internal rate of return to be 10.6%. Therefore, the cost of electricity is comparable to the grid extended power. Moreover, optimisation studies of various combinations (CSP­–photovoltaic, CSP–wind, CSP–biomass, biogas, among others) have to be examined to arrive at the appropriate configuration of the system.

The policy for Make in India envisaged in this article is “buy and make”. It is strongly felt that the process of ab initio designing and developing a system will involve a large amount of time, cost and efforts. For example, a 1MW national solar thermal plant, using a parabolic trough and linear Fresnel collectors, was developed indigenously and encountered many operational, equipment and system-level problems. The system is, therefore, far from being commercialised. Therefore, it is recommended to first buy a working system and operate, then adopt a reverse engineering process with indigenous efforts to make a system that will lead to self-reliance.