The concentrated solar power field regularly takes a pounding from critics concerned about high costs and excess complexity, but the US Energy Department continues to be a fan. In the latest development, the agency is prepping to announce a funding opportunity aimed at using advanced solar thermal technology to drive the cost of water desalination down, down, down. 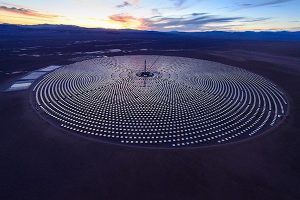 Upping the world’s supply of potable water is a key concern of global resource planners. Currently, an estimated 783 million people cannot access clean water, and 1.7 billion are at risk of water scarcity. Here’s an explainer from the United Nations:

There is enough fresh water for everyone on Earth. However, due to bad economics or poor infrastructure, millions of people (most of them children) die from diseases associated with inadequate water supply, sanitation and hygiene. Water scarcity affects more than 40 per cent of the global population and is projected to rise…

Conventional desalination is based on reverse osmosis technology, which involves forcing water through a membrane at high pressure. The high energy intensity of the process can be alleviated somewhat by deploying renewables instead of fossil fuels, but that still leaves open the issues of cost and efficiency.

In addition, though the supply of renewable energy is infinite, the opportunities for financing, siting, and building renewable energy facilities is finite. Abundance in theory is nice, but as a practical matter of national policy, the Energy Department would like to see solar power and other renewables deployed as efficiently as possible. Apparently, reverse osmosis does not make the cut.

That’s where concentrating solar power (CSP) comes in. CSP plants collect solar power from a wide field and concentrate it on a narrow focal point, to heat up an energy carrier such as molten salt or specialized oil. The carrier transfers heat energy to a steam boiler, and the steam is deployed to run turbines for generating electricity.

If you cut the process off at the steam boiler stage, there you have an instant water desalination-by-distillation system.

CleanTechnica covered one such solar powered system when it launched back in 2015 with the aim of recovering byproducts from spent agricultural water as well as distilling the brine into fresh water.

The byproduct angle is a key element, because the company behind the system — Water Fx — was counting on the value of recovered byproducts to help make the system commercially viable.

Water Fx seems to have dropped off the media radar since then, so if you’ve heard anything drop us a note in the comment thread.

Will They Or Won’t They? US Energy Dept. Ponders CSP Desalination

So far the Energy Department has only issued a notice of intent for CSP-enabled desalination, so the agency may or may not come up with a funding opportunity. If it does, you’ll know on or about September 25, when it expects to make an announcement.

The agency is also interested in CSP-enabled technologies with wide-ranging application. Industrial or commercial wastewater is a potential target, along with seawater, and applicants better be prepared to bring their A+ game:

Additionally, thermal desalination can be utilized over a wide range of salt content, making it attractive for applications that require very high salinity feedwater or zero-liquid discharge. Applicants will be expected to propose ideas that have the potential to dramatically decrease the cost of producing solar thermal energy, advance early-stage thermal desalination technologies, or design novel integrated systems that creatively use solar thermal energy to lower the cost of producing fresh water.

Tina Casey specializes in military and corporate sustainability, advanced technology, emerging materials, biofuels, and water and wastewater issues. Tina’s articles are reposted frequently on Reuters, Scientific American, and many other sites. Views expressed are her own. Follow her on Twitter @TinaMCasey and Google+.