Concentrated Solar Power from the desert

Concentrated Solar Power from the desert

Nowhere does the sun radiate more energy than in the desert. Morocco is harnessing this potential to free itself from fossil fuels with concentrated solar power plants. This is exemplary from an emerging country, and a bold step that is supported by international donors like KfW.

Four solar power plants that soon will produce electricity for 1.3 million people are being built on a desert area of 3,000 hectares. This video is only avaiable in German.

It is still early morning, but the sun already sits high in the sky. The wind blows over the red surface that stretches to the Atlas Mountains in the distance. Here in the arid and hot stony desert, not far from the southern Moroccan city of Ouarzazate, the largest solar energy complex in the world is being built on an area of 3,000 hectares. It is called Light – Noor in Arabic – and comprises four large-scale projects.

The first, NOORo I (the small «o» stands for Ouarzazate) with a capacity of 160 megawatts has been in operation since spring 2016. It already produces 400 GWh of power a year, which corresponds to the average consumption of around 400,000 people in Morocco. To this end, more than half a million parabolic mirrors track the sun, swivelling every few minutes to adjust their angle to the sun as the earth rotates. 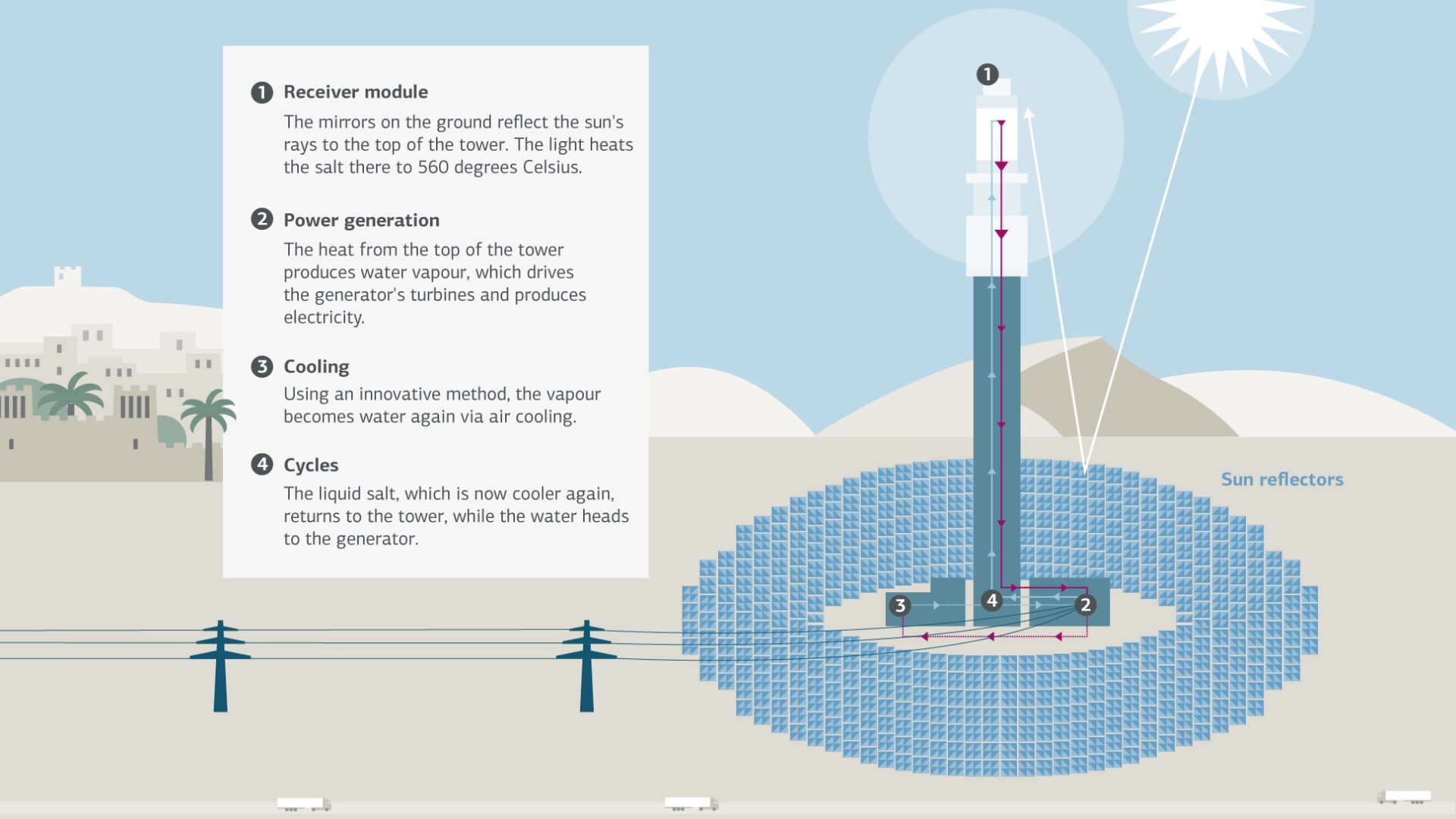 The total surface of the mirrors amounts to 1.4 million square metres, or just under 200 football pitches. They were provided by Nuremberg company Flabeg, and accurately train the light energy on an «absorber tube» two metres away, which circulates synthetic oil that is heated to 400 degrees Celsius. At the edge of the mirror farm, a turbine generates electricity via water vapour from the hot oil. The turbine was made by Siemens and Lahmeyer engineers acted as technical consultants for the project.

German companies that were successful in the international competition are helping to realise the country’s objectives. By 2030, the share in electricity production capacities based on renewable energies is due to almost double from the current 29% to 52%. There is barely any other emerging economy that has adopted such a similarly bold position. 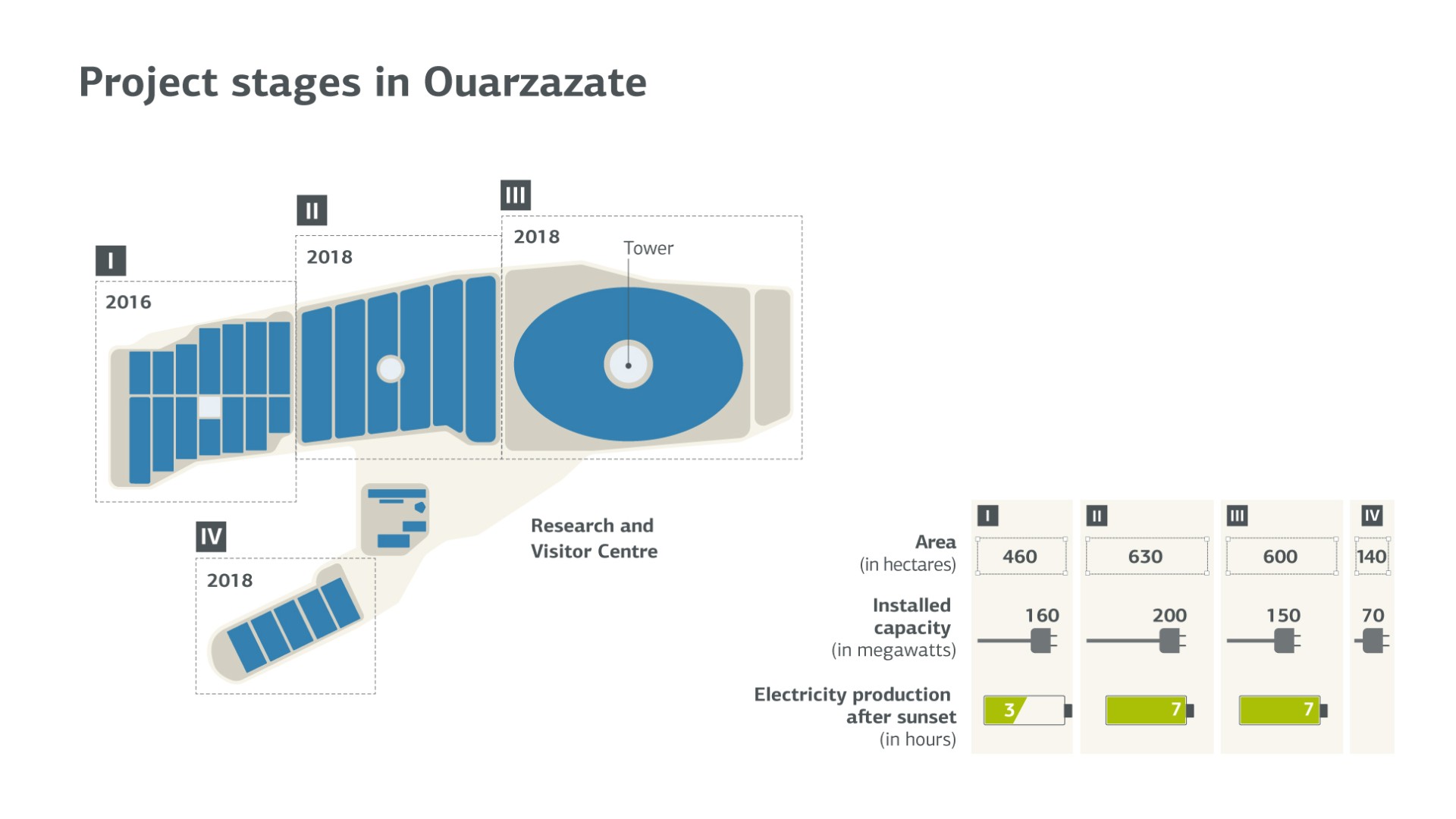 This is anything but self-evident because when Morocco decided to push forward with its green energy transition a few years ago, there were other options on the table – continuing to focus on fossil fuels, for example, to satisfy the country’s growing energy requirements, in view of the massive slump in the price of crude oil.

«The fact that Morocco plumped for a green and sustainable future shows forward, long-term planning», said Markus Faschina, Head of the KfW regional office in Morocco. «In this context, Morocco is banking on forward-facing technologies because no other country has yet built such a large solar complex with different technologies in one location.»

The government’s decision to deploy not just wind energy and photovoltaic installations but also solar thermal power plants with energy stores was not necessarily an obvious one. But Morocco created a precedent. «It is brave to act in good time and not wait for others to show you the way first,» added Faschina. This means opportunities can also be seized because the very promising project in Ouarzazate to build the world’s largest solar power plant complex with a total capacity of 580 megawatts convinced international donors.