Global solar energy supplies are growing rapidly, with nearly 10 times as much solar capacity installed today as there was a decade ago. Leading the boom is the photovoltaic (PV) panel, which converts sunlight into electricity using semiconductors. But even as the glossy rectangles become increasingly cheaper and ubiquitous, solar PV alone can’t solve the nagging question: What to do when the sun isn’t shining? As electric utilities and policymakers seek solutions for storing and dispatching energy on demand, concentrating solar-thermal power (CSP) is once again gaining traction. 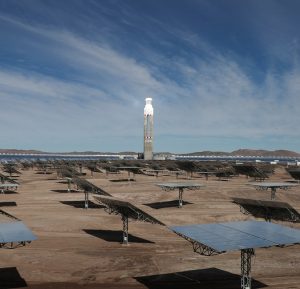 Solar-thermal systems use sun-tracking mirrors to reflect sunlight onto a receiver, which contains a high-temperature fluid that stores heat. The heat can drive steam turbines or engines to generate electricity around the clock. Or, solar thermal can directly provide heat for industrial processes to make steel, cement, and chemicals—all energy-intensive sectors that are difficult to clean up. With U.S. states and countries adopting measures to curb greenhouse gas emissions, now «might be the right time for CSP to become more broadly applicable,» said Margaret Gordon, the CSP program manager at Sandia National Laboratories in Albuquerque, N.M. 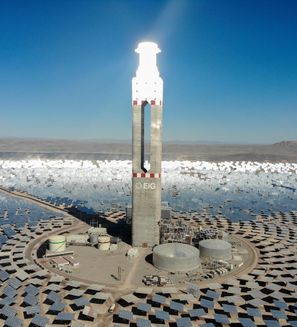 The US $1.4 billion project began full operations in June. The 700-hectare complex has 10,600 mirrors (or «heliostats») that direct sunlight to a 252-meter-tall tower. Inside the tower, molten salts are heated to 565 °C and flow down into storage tanks, turning water into steam to drive turbines. The closed-loop system has a record 17.5-hour thermal storage capacity, allowing operators to provide electricity 24/7.

«It’s flexible. It’s like a big battery of molten salt instead of lithium,» said Fernando Gonzalez, CEO of Cerro Dominador.

Bottom line: Among CSP, molten-salt power towers have the greatest cost-reduction potential, thanks to higher operating temperatures and improved efficiencies, according to the International Renewable Energy Agency (IRENA). 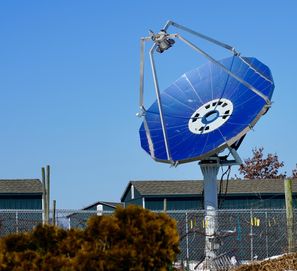 Solarflux’s prototype unit is a simplified, lower-cost version of a decades-old concept, operating at Pennsylvania State University’s campus in Berks County. Polished aluminum petals cover a 14-square-meter aperture, beaming sunlight onto a receiver at the focal point. The Focus dish is mounted on a dual-axis tracking system, so it’s always facing the sun. The receiver transfers heat to an engine or generator and, depending on the heat transfer fluid, can deliver thermal energy of up to 600 °C, the company claims. A 30-kilowatt, 42-square-meter aperture production unit is in development. 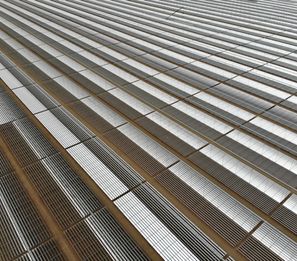 Built in an industrial park in Northwest China, this project began commercial operations in June 2020. Flat reflective panels are arranged like the stepped lenses of a lighthouse lamp (which typically also uses a Fresnel lens), concentrating sunlight on a loop of overhead pipes. Panels are oriented north-south to track the sun. In a first for commercial Fresnel projects, this installation uses molten salts—not thermal oil—in the pipes. The fluid heats to above 535 °C and flows to a steam turbine or into two molten-salt storage tanks, with a total thermal storage capacity of 15 hours. 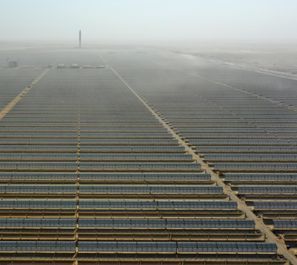 The massive US $4.4 billion complex includes three 200-MW parabolic trough arrays, the first of which will begin commissioning this year. Each unit includes 2,120 mirrored modules, which concentrate the sun’s energy onto an absorber tube placed at each module’s focal point. A low-viscosity oil in the absorber tubes rises to 393 °C, then flows into the power block. From there, the heat-transfer fluid is used to drive steam turbines, or it’s sent to molten-salt thermal energy storage tanks—each with a 12-hour thermal storage capacity. When completed in late 2022, Noor Energy 1 will be the world’s largest CSP project.

Bottom line: Parabolic trough systems are considered the most mature and (for now) lowest-cost CSP technology. In 2020, troughs made up two-thirds of the global installed CSP capacity.

is an IEEE Spectrum contributing editor based in New York City. She has worked as a staff writer for publications in New York and Mexico City, covering a wide range of energy and environment issues in the United States and Latin America.