BrightSource Energy, a leading company in the concentrated solar power (CSP) market, announced that it would be deploying its technology in China.

The technology has never caught on its its native US, but the Chinese are keen to utilise it as part of its 1.35GW demonstration pilot programme. CSP uses thousands of mirrors to concentrate sunlight on a boiler filled with water which is situated atop a tower. The process then heats the water in the boiler to high temperatures in order to turn a steam turbine to then generate electricity.

However, many utilities in the US and Europe have opted to purchase energy from traditional solar panel farms or natural gas plants. Plans to install CSP have grown increasingly infrequent in recent years. 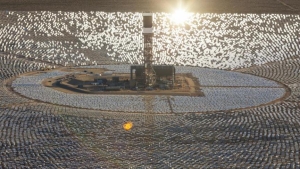 Two of the world’s best-known concentrating solar projects are located in Las Vegas and Morocco. The former, called the Ivanpah Solar Power facility, is the world’s largest solar thermal power station at 392MW. Morocco’s Ouarzazate Solar Power Station has a capacity of 160MW and was connected to the grid in February of this year.

The Delingha project will be the first for the BrightSource-Shanghai Electric Group Co joint venture.

“China recognizes the integral role concentrated solar power with storage can play in reducing emissions while helping to ensure long-term grid reliability,” said David Ramm, CEO and Chairman for BrightSource Energy. “This pilot program is of unprecedented scale and will drive cost reductions throughout the CSP supply chain, increasing solar thermal’s competitiveness around the world.”