The CSP plant represents the first stand alone Molten Salt Test Loop in the world and is located close to the ASE manufacturing plant in Massa Martana (Perugia). Italy.

The test loop will provide a focus for research oriented to the new frontiers of CSP.

Built with Italian components and Japanese engineering the aim of the test loop is to be a showcase for the Molten Salt technology and the Italian supply chain.

The aim of the project led by ASE with the Engineering of Chiyoda Corporation is to enhance the economy and reliability of parabolic-trough power plants. This type of solar thermal plant concentrates sunlight using parabolic mirrors on a row of receiver tubes containing a heat transfer medium.

The steam at a higher temperature thus produced will enable more efficient operation of the steam turbine for power generation and the TES tanks using molten salts only can be significant smaller compared to oil plus molten salts.

The potential offered by the salt is to be investigated at the test facility equipped with receiver tubes made by Archimede Solar Energy (ASE). 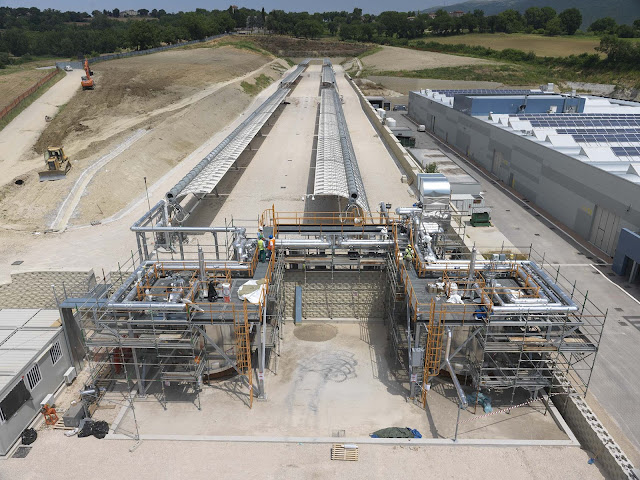 Today, molten salts are already being used as the heat transfer medium at the Archimede ISCC located in Priolo Gargallo, Sicily, a plant equipped also with receiver tubes manufactured by ASE for Enel Power.

Chiyoda Corporation, headquartered in Yokohama, Japan, is an engineering, procurement and construction contractor (EPC), listed at Tokyo Stock Exchange, working on a global basis with a lot of project experiences in industrial plants such as petroleum, petrochemical, chemical, LNG and power facilities.