GlassPoint Solar, the leading supplier of solar to the oil and gas industry, is showcasing its proven solar technology that generates steam for heavy oil production at the SPE Heavy Oil Conference and Exhibition 2016 in Kuwait.

In addition to being a gold sponsor of the conference and a major exhibitor, the company is also participating in two plenary sessions on the future of heavy oil production. The exhibition’s visitors will also get a chance to experience a virtual reality tour of GlassPoint’s one gigawatt Miraah project, being built in partnership with Petroleum Development Oman (PDO) on an oilfield in southern Oman.

“Using solar at large scale in the oilfield will help Kuwait greatly reduce its total reliance on imported gas. At the same time, solar powered oilfields can contribute significantly to His Highness The Amir of Kuwait’s vision of achieving 15% of the nation’s energy capacity through renewables by 2030. GlassPoint’s proven solar technology empowers oil producers with an economical and emissions-free alternative to traditional steam flooding techniques,” Shehab said. 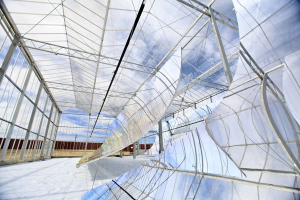 He added, “The convergence of conventional heavy oil extraction with renewable technology means Kuwait can reach its heavy oil targets without the dependence on imported gas. The deployment of solar EOR in Kuwait is both an environmental and strategic decision for the future of the oil and gas industry and the economy.”

GlassPoint designed a solar thermal technology specifically to meet the needs of the oil and gas industry. Unlike solar panels that generate electricity, GlassPoint’s enclosed trough technology uses large mirrors to concentrate sunlight and boil water directly into steam. The mirrors and other components are sealed inside a greenhouse structure to protect the solar collectors from the wind, sand and dust common in remote oilfields. GlassPoint’s technology has been deployed on oilfields in California and the Middle East, where it has demonstrated consistent operational uptime even through severe sand storms.

May Alzanki, GlassPoint’s Sales and Business Development Director in Kuwait spoke on the session, “Heavy Oil: Economics, Challenges and Opportunities.” Alzanki explained that heavy oil development projects are strategic in nature and should be considered with a long-term economic and environmental view, including the deployment of solar energy. “Because liquefied natural gas (LNG) prices are linked to oil, it is challenging to maintain a continuous supply of fuel at a favorable and sustainable cost. This creates an opportunity for oil producers to deploy solar and lock-in a reliable, low-cost supply of steam for decades to come,” said Alzanki.

“Thanks to the enclosed design which eliminates the impact of wind, GlassPoint uses very light, thin mirrors. The mirrors are made of a fraction of the raw material used by outdoor systems, reducing costs and easing installation. Since the mirrors are low-cost, we pack them much closer together to achieve high energy density, reducing the amount of land required for large-scale projects,” she added.

Following a successful pilot with PDO, GlassPoint was awarded Miraah in July 2015. Currently under construction, Miraah will be one of the world’s largest solar plants of any kind. This landmark project will deliver over one gigawatt of peak thermal energy, generating 6,000 tonnes of steam per day to extract heavy and viscous oil at PDO’s Amal oilfield in southern Oman.