Spain is a world leader in renewable energy storage. The scenarios of large volumes of renewable technologies that can not be managed in electricity systems are raising concern about the need for storage, to avoid losses due to spills. This would not be a problem with balanced growth between manageable and non-manageable renewables and, fortunately, in countries such as Spain, unlike the center of Europe, this would be possible.

GTM Research, has recently published a study in which it estimates that the storage capacity of energy will reach 20,600MWh in 2022, forgetting the technology that at the moment and most likely in the future will lead the storage of energy for electrical purposes. 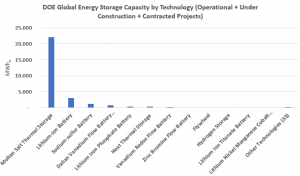 Spain is a world leader in energy storage in new renewable technologies thanks to the solar thermal which, after the great hydraulics, is the leading storage technology for renewable electricity generation, according to the DOE Global Energy Storage data (Department of Energy of the USA). ), which Protermosolar has analyzed.

Worldwide, the storage capacity of solar thermal power plants in operation and under construction amounts to 22,150 MWhe, while the rest of technologies, including batteries, are at a much lower level, since all of them are grouped at only 6,600MWhe.

The analysis also indicates that the technology of molten salts for the purpose of electric generation is, on a world level, much higher than that of other alternatives, such as batteries.

The solar thermal is the only renewable managed, with prices that are currently between 50 and 60 € / MWh, as shown by the contracts awarded in recent international competitions.

The storage in solar thermal power plants has investment costs of around € 40 / kWh of installed equivalent electrical capacity, while battery systems, taking into account the battery pack and the balance of system, are 10 times higher in price.

Storage is integrated into the solar thermal power plants themselves, so that their generation can follow the needs of the demand. Having manageable power plants is essential for any electrical system, instead of having to make additional investments to try to take advantage of the discharges that would occur with a greater penetration of non-manageable renewable power plants.

But in addition, this volume of storage could be offered, with a very small investment, to take advantage of wind energy discharges, which usually coincide with sunny days, with a 40% yield.

In the recent competition of Dubai of 700 MW of power to be dispatched between 4 in the afternoon and 5 in the morning of the next day, the photovoltaic technology could not compete for lack of product and price and the solar thermal was awarded for being more cheap than the combined cycles. Today, solar thermal power plants are the most competitive technology for commercial-sized power plants with several hours of storage, according to Protermosolar.

The thermosolar deployment in the future will only have storage plants and countries such as China and Dubai (UAE) will be the new world leaders in energy storage in the short term, thanks to the 1,400MW and 700MW, respectively, that are under construction at present. .

For Luis Crespo, president of Protermosolar, «it is difficult to understand that with these references and with the costs to which the solar thermal power plants could be deployed in our country, that the Commission of Experts have not taken into account solar thermal power in the future generation mix, which the commission itself has foreseen with 80,000 MW of non-manageable renewable technologies, which will be unfeasible both from a technical and investment point of view and would oblige the maintenance of a very high backing of conventional power plants, contradicting in its terms the concept of Energy Transition. It is necessary a balanced mix of solar technologies (photovoltaic and solar thermal) that allows more rapid progress towards decarbonisation, without increasing costs for the system, with photovoltaic generation in the central hours of the day and thermosolar in the evening, thanks to storage and backup capacity. »

Protermosolar is the association that represents the Spanish sector of the thermoelectric solar industry and is made up of 50 members.