Ivanpah 1 is one of only three large-scale Concentrating Solar Power (CSP) facilities.

I don’t even know what Isengard is — but apparently this has the GTM solar analysts all aflutter.

Here’s Isengard. According to the Lord of the Rings Wiki, Isengard "was one of the three Fortresses of Gondor." (Note that Ivanpah 1 is one of only three large-scale Concentrated Solar Power or CSP facilities.)

It’s extremely hot in Isengard. The Mojave is one of the hottest places on earth (but it’s a dry heat).

Isengard is made of a circular stone wall surrounding a plain, in the center of which was the Tower of Orthanc. Ivanpah is circular and employs about 170,000 large mirrors, in the center of which is a large tower and boiler. Isengard was built by Orcs, I imagine, while Ivanpah was built by more than 500 well-trained humans. Ivanpah had a desert tortoise issue which was extensively (and expensively) dealt with. Isengard had a tortoise-clearing event at which the tortoises were shelled, roasted like pistachios, and washed down with a tasty mead.

According to the LOTR wiki, Isengard came into the possession of the evil Saruman and became his personal realm until his defeat during the War of the Ring. Alan Salzman of VantagePoint was involved in this project.

And here’s the 370-megawatt Ivanpah concentrating solar power field in the Mojave desert.

We don’t think so. 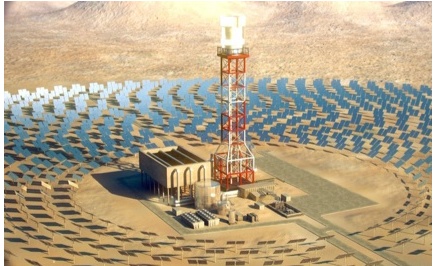