Concentrated Solar Power major events of the past quarter

Concentrated Solar Power major events of the past quarter

From Japan to Germany to the US, the third quarter of 2016 has seen intense research and development efforts in the CSP sector. Whether to improve efficiency of components, prolong the lifetime of materials, or design less expensive collectors, there’s a clear international drive to reduce the costs of CSP systems.
The pursuit of cost reduction is the only way CSP will find its way into new markets and supersede PV and wind technology.
This is especially true in markets that are currently weighing up different renewable energy options for their power generation, such as South Australia, where Repower Port Augusta Alliance is actively calling for the deployment of six CSP plants to
replace the decommissioned coal power stations.
Similarly, Chile’s tender for electricity supply last August evaluated proposed energy projects purely on price, and the same will apply to the country’s next power supply tender in December 2016.
Meanwhile, China continued to attract foreign developers over the last three months, including Germany’s Frenell, Sweden’s Cleanergy, U.S. based Solar247, and Israel’s Ener-t.

These companies are working on bringing their technologies and expertise to the market in collaboration with local firms.
The biggest announcement of Q3 2016 was Dubai’s intention to deploy 1,000 MW of CSP by 2030. DEWA, the emirate’s state utility, is moving fast with the 200 MW first-phase to bring it online by April 2020, in time for the Expo 2020 event that starts in October of the same year.
We have also seen progress in several projects under construction, namely China’s Qinghai Delingha, South Africa’s Kathu solar park, Morocco’s Noor II and Noor III projects, and Israel’s Ashalim Plot B. 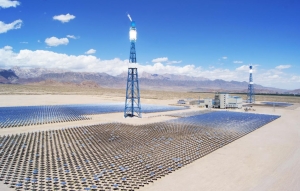 That said, the industry saw an unexpected setback towards the end of the quarter when Eskom declared it would not be signing further power purchase agreements with renewable developers due to insufficient grid capacity. The statement came days after Eskom secured a $1.4 billion loan from the African Development Bank for the expansion of the country’s transmission network, raising concerns among the global renewable energy community.
In the coming months, we will continue to monitor South Africa’s next steps while keeping an eye on the rapidly growing markets of Chile, China, Morocco, and the UAE.