This generation volume is 4.1% higher than the previous record of 2015 (4,102 GWh) and represents 2.67% of the total electricity generated in Spain in the first eight months of the year. In August, the solar thermal input reached about 9% of the generation in a timely manner, with a 2% contribution in the night hours. 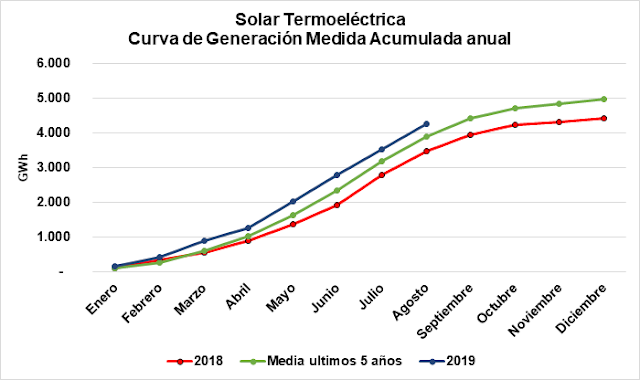 Concentrating solar power has set a historical record for electricity generation by adding 4,269 GWh in the first eight months of 2019, which represents a generation volume 4.1% higher than the previous record of 2015 (4,102 GWh), according to REE data (Source: ESIOS) collected by Protermosolar, the Spanish Association for the Promotion of the Thermosolar Industry, which indicates that this generation represents 2.67% of the total generated in Spain in this period and represents the contribution to the historically higher system.

Protermosolar also notes that during the month of August, concentrated solar power contributed to the system 745 GWh (Source: ESIOS), a figure above the historical average, with hourly contribution points that accounted for 8.72% of the total generated and with numerous time slots above 7%.

Protermosolar highlights that, at night, between 9:00 p.m. and 6:00 a.m., the energy from the solar thermal plants has had points exceeding 2% of the total hourly contribution to the Spanish electricity system in August, which clearly demonstrates how This technology can meet the demand at night and its hourly and seasonal complementarity with other technologies, especially photovoltaics.

Protermosolar points out that these figures are achieved with the same installed capacity as in 2013, demonstrating the reliability of the technology and maintaining efficiency despite the fact that several plants have already exceeded 10 years of operation. The Spanish solar thermal park is made up of 1/3 part by centrals with storage, that load and unload their tanks more than 250 days a year, maintaining their capacity of operation without degradation and allowing to generate electricity after sunset.

On the other hand and in view of the significant reduction experienced by the price of the pool in August that coincides with the rise in solar production, it is worth recalling the contribution of renewables to the containment of the prices of the generation market and in particular of solar technologies (photovoltaic and solar thermal) during the summer months.
For Protermosolar, these data show the confidence that must be had in this technology and the right thing to propose a greater deployment, such as the one foreseen in the PNIEC, in this next decade to reach the objectives to 2030. In this sense, to implement systems of storage in those plants that currently do not have it or hybridize some plants with biomass, would reinforce its value for the system. Likewise, supplying own consumption with attached photovoltaic installations would increase the solar thermal generation of current plants. Regarding the future fleet, its complementary photovoltaic office would contribute to the integration of renewable energy into the system, optimizing existing and future transmission infrastructures, and contributing to the stability of the network.
The new solar thermal power plants, equipped with large storage systems and dispatching electricity from sunset, would alleviate the ramps that would cause the photovoltaic production to fall daily in the afternoon and would largely prevent emissions that would otherwise , would be associated with the combustion of gas in the combined cycles. But in addition, the storage tanks of the solar thermal power plants could be used to capture the spills of wind and photovoltaic technologies, avoiding investments of more than 20,000 million euros in battery systems or new pumping facilities. The solar thermal power plants could even act as a strategic reserve available to the system operator for times of maximum demand, being able to maintain an important part of its capacity for days, weeks or months, when required with absolute availability.
Protermosolar is the association that represents the Spanish sector of the thermoelectric solar industry and is made up of 48 members. The solar thermal technology, in which Spain is an international leader, has recently broken into the global renewable energy landscape and currently has great growth potential due to its manageability and storage capacity, due to its high job creation local and for its potential for cost reduction. The installed capacity in Spain is 2,300 MW and the contribution of Spanish companies in international markets is around 75%.