Concentrating solar power (CSP) refers to the generation of electricity from concentrated direct normal irradiance (DNI) from the sun. Since the concentration ratio used is typically high, it requires a tracking system to redirect the concentrated sunlight to a receiver. The receiver can be comprised of a heat transfer fluid, which can, in turn, be used to drive a heat engine (steam, air, or supercritical carbon dioxide turbine cycle) to generate electricity, as shown in Fig. 1. This overview focuses on thermal energy production from a concentrated solar thermal (CST) system (i.e., neglecting the power block part of Fig. 1). 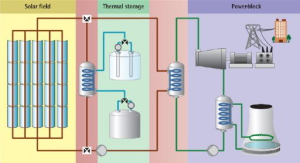 Given the low energy density and intermittent nature of the solar resource, an important design parameter for CSP plants is the solar multiple (SM). SM relates the size of solar field to the energy demand of the power cycle at its design point, as follows (Goel et al., 2020):

Due to the seasonal and daily variations of DNI, it is typical to have SM > 1.0 along with a sizable thermal storage unit to ensure operation even when the direct DNI input is below the design value for full-load plant operation. As a result, CST power plants are typically designed with 6–12 h of integrated storage capacity and SMs in the range of two to three (Mehos et al., 2015).

The collector of a CSP system consists of two main components: the concentrator and the receiver. The concentrator can be designed as either a point focus or line focus system (achieving a higher concentration ratio). The receiver, in turn, is located at the focal point (or line) to absorb as much of the concentrated DNI as possible and, in the case of a CST system, transfer it to a thermal fluid passing through it. The line focus and point focus types of collectors have been deployed at commercial scales in four different types, as shown in Fig. 2 (Mehos et al., 2017), which are as follows:

A comparison of the four technologies is provided in Table 1.

According to SolarPACES, the installed capacity of parabolic trough collector CSP/CST systems in July 2021 was ∼ 4,650 MW. This was closely followed by central receiver power tower technology at ∼ 1,330 MW (IEA, 2019; Lilliestam et al., 2021). Table 2 provides the breakdown for installed and under-construction systems by the type of heat transfer fluid used.

CSP/CST technologies are often marred by their own set of limitations that indicate room for future research. One such limitation is the daily and seasonal variability in DNI. The intermittency of the solar resource, from variations in DNI, has been proven to be quickly addressable by equipping the CSP/CST system with a thermal energy storage (TES) unit. With a TES unit, the solar energy collected during daylight hours can be used to heat the storage medium, from where heat can subsequently be extracted as needed using a second heat transfer cycle. TES units provide additional benefits, including dispatchable high-value energy, operating reserves, reliable system capacity, and the ability to ramp operations rapidly. TES systems though appealing suffer limitations, such as storage capacity and form, string time, special structural requirements, energy releasing efficiency, and operation time (Mohd et al., 2008; Faisal et al., 2018; Saha et al., 2020).

Another limitation with the current state of the art of CSP/CST technologies is the achievable temperature of the heat transfer fluid. Molten salts and synthetic oils are currently the most extensively used heat transfer medium. Although the use of salts provides the benefit of an additional absorption of latent heat as the salts change phase from solid to liquid, the use of salts is inhibited by the fact that they quickly degrade at temperatures of ∼ 500°C (Mehos et al., 2017). Further research is needed to identify salts that will retain their stability at temperatures > 800°C as well as alternative materials like solid particles and sCO2.

Another limitation associated with the CSP/CST systems is the degradation in performance of collectors from soiling, dust accumulation, and mirror erosion (Wu et al., 2020; Niknia et al., 2012). They have a direct impact of the ability of collectors to concentrate DNI. While soiling and dust accumulation rates depend on the location and the frequency of high winds, sandstorms, etc., associated with any arid region, mirror erosion is a secondary phenomenon resulting from the impact of abrasive particles on the mirror surface resulting in a reduction in mirror reflectance.

CSP/CST systems can play an undeniable role in the future due to their ability to attain high temperatures by concentrating solar energy. However, this heavily depends on improvements in dispatchability via integration of TES, attaining higher heat transfer fluid temperatures and achieving significant cost reductions in the solar collector field for all the CSP technologies. Furthermore, complementary improvements in the power conversion system are also needed to remove the constrains of a steam-Rankine power cycle.