When one of the world’s largest concentrating solar power plants rose from the desert sands in the Western Region of the Abu Dhabi Emirate back in 2013, more than a few heads exploded. 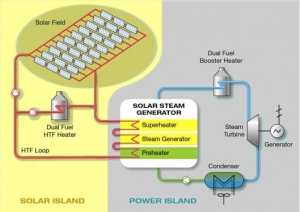 Aside from being the site of much of the Emirate’s oil and gas reserves, the western desert is a harsh environment for massive, precisely engineered renewable energy facilities, and concentrating solar technology still has yet to prove its competitiveness in the general market. However, in its first year of operation, the so-named Shams 1 plant beat expectations by a wide margin, and its second year figures are also better than predicted.

So… does concentrating solar power (CSP) have a future? CleanTechnica had an opportunity to tour the plant* and speak with Abdulaziz Al Obaidli, General Manager of the Shams Power Company, who gave us some insights into the keys to its success, and the prospects for future CSP development.

Shams 1 is a 100 megawatt facility with 258,048 mirrors arranged in parabolic troughs covering 2.5 square kilometers. It’s the only plant of its kind in the world completely surrounded by a solid wall…

…and that’s a critical difference between Shams 1 and other concentrating solar power (CSP) plants. As explained by Al Obaidli, the wall provides a significant measure of protection from desert wind and sandstorms. Storm-grade winds can take out large sections of equipment in a conventional CSP plant, but according to Al Obaidli, one of the strongest storms in recent memory passed through last year and it only damaged 20 out of the 258,048 mirrors.

The parabolic troughs themselves also include design features that prevent wind damage. On just a few minutes’ notice they can be rotated into a “safety” position, and then locked in place.

CleanTechnica has been following the solar facility since it first cranked up operations back in 2013. In January 2015, we summed up the figures for 2014, the first full recorded year of operation:

The company had expected to generate about 193,000 MWh electricity in 2014 but managed to generate just under 215,000 MWh. This translates into an increase of 12% over the expected generation…

In a February 2015 followup piece, CleanTechnica toured the facility as a guest of Masdar, Abu Dhabi’s government-supported cleantech corporation, taking note of the high winds and water scarcity issues.

During our new visit on January 16, 2016, Al Obaidli gave our tour group a rundown on the figures for 2015, and they confirm that the first-year achievement was no fluke. Though the solar plant’s “nameplate” capacity is 100 megawatts, in peak summer days during 2015, it often climbed up to its maximum of 125 megawatts.

In terms of gigawatt-hours, the 2015 production target was 210 and the plant actually generated 216.4, beating both its target and its 2014 mark.

The improved performance can be ascribed partly to the plant’s rather modest control room, which sports a few computer stations rather than an array of switches and dials:

Controllers are constantly monitoring and adjusting the system as needed throughout the day, so a good deal of learning and fine tuning take place during the first years of operation. One critical period occurs in the hours after dawn, when solar radiation increases quickly. The troughs must be brought online gradually in order to achieve maximum efficiency without being damaged by the rapid increase in temperature. To that end, power production doesn’t begin until about an hour after sunrise.

Speaking of temperature, that brings up another challenge faced by Shams 1. The CSP supply chain has broadened and matured in the last several years, but when the plant was constructed the supply chain was razor thin. Many components were manufactured in Europe, where they were not exclusively tailored for high heat and extreme day-night temperature swings.

One key feature of Shams 1 that both Al Obaidli and plant manager Borja Sanz Limon brought to our attention was the mirror washing system. Washing is a critical feature of efficiency for any type of solar system, so keeping solar surfaces free of dust and debris is imperative.

While sprayed water and/or rainwater can help keep solar surfaces clean in more temperate areas, at Shams 1, the lack of rainfall combined with the high level of dust make a brush-based system necessary for each wash. The brush system must also be sophisticated enough to deal with the unique challenges of washing a curved surface that is bisected by a somewhat delicate, glass-enclosed pipe.

The solution is a fleet of five washing trucks sporting robotic arms that are tailored to the troughs, which are put in “washing” position (washing position is not the same as the safety position, by the way) each night. The truck driver gets into position parallel to each trough and drives very, very slowly alongside, and the arm automatically adjusts to any slight weaving that occurs so as not to bump into the piping. All that sophisticated equipment adds up to about $500,000 per truck:

That’s quite an investment, which explains why the mirrors are cleaned on a weekly cycle. The relative loss of efficiency by day 6 has to be balanced against the capital investment in a larger fleet, and a fleet of five is apparently the right balance.

All this TLC is expected to pay off in terms of achieving the plant’s intended lifespan of 25 years, which so far it is on track to achieve. In the meantime, it is also achieving the goal that a carefully engineered CSP can not only survive but thrive in harsh, dry conditions. As Al Obaidli put it to us:

This is a commercially successful project. In the middle of the desert, we were able to produce what we were supposed to produce, and even more.

How Does CSP Survive Without Solar Storage?

We had buttonholed Al Obaidli after his presentation to ask about solar storage, and this is where things get interesting.

While the price of CSP has been dropping, photovoltaic cells have dropped much more. So, by the raw numbers, CSP is not keeping up. However, the recent emergence of solar storage into the marketplace can provide CSP/storage systems with a leg up.

The problem for Shams 1, as Al Obaidli explained, is that back in 2010, when the plant was still in development, solar energy storage was not fully embraced by the marketplace.

The storage element added yet another wrinkle of risk onto the plant, which was already considered a high-risk venture for a number of factors: using CSP technology, being built in the desert, using natural gas to boost the efficiency of the steam turbine (more on that in a second), and using air instead of water to condense the steam back into liquid (conventional water-based cooling accounts for 90% of water consumption in a typical steam turbine power plant, so water cooling in the desert is a non-starter).

In 2010, storage was the straw that broke the camel’s back, so the decision was made to go ahead. Although the plant does not generate electricity at night, as a grid-connected facility, it helps reduce the need to build new gas-fired power plants to meet growing peak demand periods in Abu Dhabi, much of which involves the use of air conditioning during the summer months.

Solar Power With A Fossil Twist

While the use of natural gas at a solar plant may disappoint solar fans, the reality is that fossil fuels are going to be in use long into the future, though they will necessarily play a much smaller role than they do now. As a parallel, consider that history of firewood for household heating has not yet finished unspooling, even in many industrialized countries.

In that context, Shams 1 provides an illustration of how fossil fuels can deployed conservatively in tandem with renewable energy. The plant’s operating permit caps the amount of gas it can burn at 600,000 Btu per year, and in 2015 it was able to operate well within the limit.

More generally, Shams 1 demonstrates that renewable energy facilities are not one-size-fits-all, but can be tailored to leverage resources that are specific to each site or region, enabling another path to using less fossil fuel, to greater effect.

All photos by Tina Casey.

*The Shams 1 tour was on CleanTechnica’s activity list as guests of Masdar for Abu Dhabi Sustainability Week 2016, and this is the first of a series of reports we’ll be filing about the event.