Morocco launches the first phase of the largest concentrated solar power (CSP) plant in the world.  When fully operational, the plant will produce enough energy for more than one million Moroccan households.
Inaugurated officially today by His Majesty Mohammed VI of Morocco, the solar plant underlines the country’s determination to reduce dependence on fossil fuels, use more renewable energy, and move towards low carbon development.
The three-plant Noor-Ouarzazate CSP complex called NOORo expects to achieve over 500 megawatts (MW) installed capacity, ultimately supplying power to 1.1 million Moroccans by 2018. It is estimated that the plant will reduce the country’s energy dependence by about 2 and half million tons of oil, while also lowering carbon emissions by 760,000 tons per year. 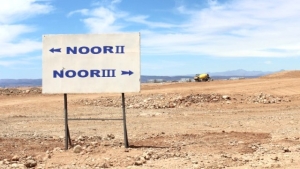 Concentrated solar power is such a promising technology that the International Energy Agency estimates that up to 11 percent of the world’s electricity generation in 2050 could come from CSP. This is especially true in the Middle East and North Africa, a region with abundant solar resources and high hopes of eventually helping to meet the E.U.’s demand for energy.
“With this bold step toward a clean energy future, Morocco is pioneering a greener development and developing a cutting edge solar technology,” said Marie Francoise Marie-Nelly, World Bank Country Director for the Maghreb, “the returns on this investment will be significant for the country and its people, by enhancing energy security, creating a cleaner environment, and encouraging new industries and job creation.”
Despite the potential of CSP, relatively high technology costs, when compared to fossil fuel alternatives, deter utilities from investing. Concessional and public financing were key to lift this project off the ground. The Moroccan Agency for Solar Energy, the government agency focused on the country’s solar ambitions, secured over $3 billion needed for the Noor-Ouarzazate complex from the African Development Bank (AfDB), the Climate Investment Funds (CIF), European financing institutions and the World Bank.
“This launch shows that the low-cost, long-term financing provided by the CIF can serve as the spark that attracts the public and private investments needed to build massive CSP production facilities at an attractive cost for countries interested in developing solar energy,” said Mafalda Duarte, Head of the Climate
Investment Funds.
Trailblazing projects on the African continent, like the Noor solar plant, are proving the performance of CSP. As well as the environmental benefits, the plant results in new, local jobs, and can lead to a high-performing sustainable energy economic sector for Morocco.
Yacine Fal, AfDB resident representative in Morocco, said: “Noor solar complex is part of the innovative operations of AfDB in the energy sector in terms of financing and technology. It stands to serve as an example for Africa and the world about how to create effective pathways to greener and more inclusive economies through renewable energy”.